Predator 2: My thoughts on how it could've been Epic 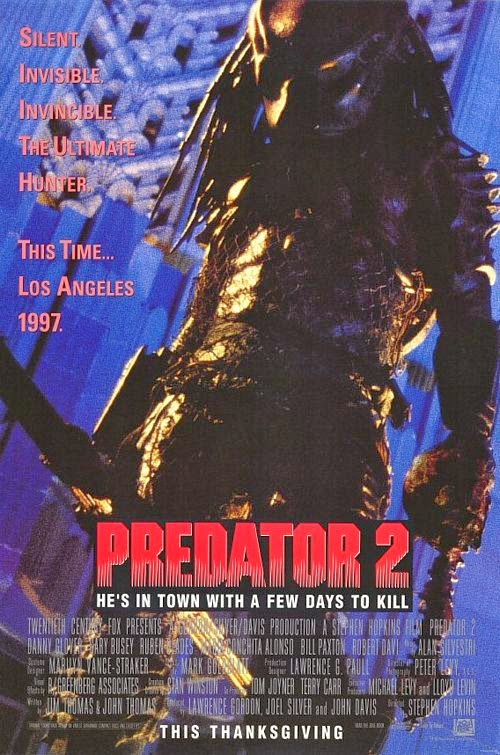 I'm gonna write this down before my ass forgets it, because I think this epiphany I just had is actually rather good.
We all know Predator 2 was not the sequel we deserved and Danny Glover was probably not the best choice for the star and don't get me started on Gary Busey. The movie wasn't terrible like AVP2 but I think it could've been better, and here's how I would've done it!
1997 Afghanistan
Dutch (Schwarzenegger) is deployed with a new team to support a PMC put down an "insurgency" during the Afghan civil war.
Dutch's team reaches the the perimeter of the village at dawn but there's is no activity. The team enters the village and performs a sweep and clear, they come across bodies of skinned soldiers, Dutch appears unaffected as he tells one of his team to call in the situation and another to cut down the bodies, Dutch rips the dog tag off the bodies and scans through them briefly then mutters these are not the men we're looking for. Just then something rushes across the shadows of the building, Dutch silently signals to his team and they move in the direction of the movement, they move some debris and the thing quickly scurries further back under the debris covered floor, one soldier reaches down and grabs a little Arab girls wrist and pulls her up. She is famished and filthy but they decide to keep her so she doesn't go alert the local militia.

This environment keeps with the urban jungle theme from P2 and keeps the hinted at theory of "especially hot summers bring the chubacabra"
The story follows the same basic plot as the original as Dutch's team finds the village then proceeds further towards the war torn city in an effort to renevous with the PMC's. Same basic events take place as Dutch's team is hunted down one by one as the Predator kills them. Dutch adapts quickly to the Predator's attacks which would be expected since he's had previous experience against the alien.
Now this is where the payoff comes in! This isn't actually a straight up Predator sequel....
The final confrontation between Dutch and the predator takes place in the city during the battle between the PMC's and the local insurgency so while these two duke it out there's also a fierce fire fight going on between these other two parties. Dutch uses environmental traps set by the insurgents for the PMC's to battle the apparently technologically superior Alien, and just like the original  the ugly motherfucker drops the mask gives Dutch and ass whooping and corners Dutch, in a last ditch effort Dutch detonates some c-4 near an oil tanker but this time ol Preds was prepared and fires up a shield to protect him from the explosion then shit gets real and proceeds to kick the ever living shit out of Dutch finishing him off with a shot him that throws him 20 feet into another oil tanker truck then blows it up with a blast from it's shoulder canon.
The Predator roars out a deafing warcry and retracts his claws. The PMC's and insurgents turn their attention to the Predator but the Predator begins to rip them apart till only a few PMC's remain. As they fire they're last few rounds from their hand guns the Alien unsheathes his claws as he walks towards the with the flaming remains of the oil tanker behind it....suddenly the flaming debris shudders and shifts as the metallic exo skeleton of a T-800 cyberdyne systems model 101 emerges from the wreckage! The Predator continues towards the remaining PMC's when it's suddenly hit from behind from a grenade shot from and M-16, the Predator slowly gets up and scans the direction the shot came from but detects no heat signature...as the Terminator walk right by it walking determined towards the PMC's as the T-800 passes the Predator it scans the remaining PMC's and one target registers as Ryan Brewster..Kate Brewsters older brother and future first lieutenant in the future resistance under John Connor.
Meanwhile the Predator regains his mask and begins scanning the area thru multiple filters until it finally detects the Terminator! The Terminator shoots the PMC's and reaches down and lifts Ryan by the throat off the ground. As Brewster writhes gasping  for air face to face with the Terminator two glowing claws rip thru the abdomen of the Terminator, sparks shoots out as the Terminator drops Ryan Brewster and struggles to break free from the Predator. Brewster crawls away as the two fight, the each inflicting heavy damage to the the other. After the smoke settles Terminator stands over the mortally wounded Predator with it's metal foot crushing the control panel on the Predators wrist the Predator manages to say something in it's native tongue and chuckles as neon green blood spews from it's mouth, the Terminator scans for and appropriate response and suddenly multiple spears penetrate the Terminators endo skeleton and in a flash the Terminator's head drops to the ground and the light in it's optics fades out as multiple predators uncloak around the Dying Predator and Terminators headless torso.
They gather up they're fallen comrade and board the ship that's uncloaked behind them, as they walk back towards the ship the Terminators head is seen in the foreground laying in the sand as a Predators hand picks it up.
In the distance a battered and bruised Brewster see's the ship depart Earths atmosphere as a military chopper lands nearby and a man in desert camo walks thru the smoke towards Brewster and offers a hand simply saying "Come with me if you want to live..."

Posted by XxSITHappensxX at 3:59 PM