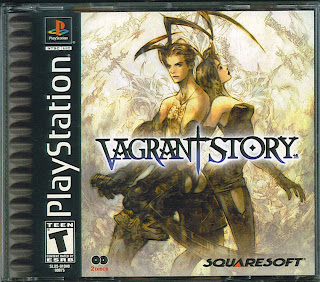 From the creator of Final Fantasy Tactics comes a new adventure in the world of Valendia called Vagrant Story!
The thing that grabbed my attention first was the art style the game used, I liked the comic style text bubbles and the character design was unique. I loved FFT so when I found out this game was developed by Yasumi Matsuno, the same person responsible for FFT I didn't hesitate in buying it.
The story of Vagrant Story has a very similar feel as FFT with the political intrigue and shadowy characters with hidden agenda's.
The game has a heavy focus on Weapon creation and the battle system is one I've never experienced before, when you are moving thru an area you don't randomly encounter enemies ala Final Fantasy they are all on screen and you can try and avoid them or attack. If you attack a wire frame sphere appears around Ashley (the protagonist) and depending on the weapon type determines the size of the sphere, ie Pole, Sword, Ax, Crossbow.
When an enemy is within the target radius you choose a particular body part to attack Head, body, arms, legs, then you attack and try to chain attacks by timing them based on on screen prompts (not easy), defending works similarly by pressing either triangle, circle, square or X at just the right moment(!) Ashley will either block the attack or counter it depending on what action you have mapped to the corresponding button (again not easy).
I love the atmosphere and lore of Vagrant Story, but make no mistake this IS NOT Final Fantasy and if you are not skilled at map reading, sense of direction and inventory management you might find Vagrant Story too much of a challenge, as I suspect was intentional when it was being developed. Hell I've hit a brick wall in the LimeStone Quarry, I have plenty of powerful weapons to deal with everything from humans, dragons, undead and evil things but these creatures are too damn powerful looks like some serious grinding is needed!