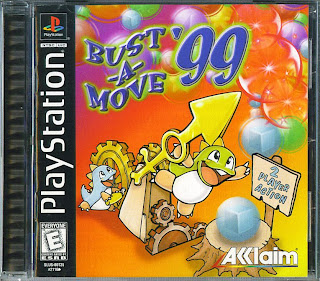 My Friend Krogenar got this game for my girlfriend after discovering her dark secret addiction to puzzle games. Funny....Bust a Move 99 actually was originally  released in the arcades in 1996, then in 1997 on the Dreamcast and finally on the Playstation and N64 in 1999.
Basically players control Bub...some super deformed dinosaur that operates a "bubble cannon" and the objective is to shoot the colored bubble up to a corresponding colored bubble above before they drop down to the bottom of the screen. Similar concept to Tetris but kinda reversed, there is strategy to the game which lends itself to the games multi player mode where players can choose from eight different characters to play. 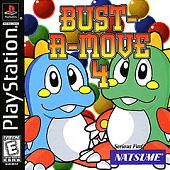 BAM4 hit arcades and PlayStation in 1998!
BAM 4 has updated graphics and many additional modes to keep players popping bubbles till they're blue in the face.
Puzzle Mode Stages A-Z After beating stage A choose stage B or C, beat stage B and choose either stage D or E, beat stage C and choose stage F or G.....
Story Puzzle Mode
Story Vs.Mode play the game and learn the fascinating story behind the game...
Survival Mode self explanitory...you can unlock hidden characters like Woolen, Monsta, Packy and Maita
PvP self explanatory
Edit Mode create stages for others to play!

Posted by XxSITHappensxX at 5:14 PM 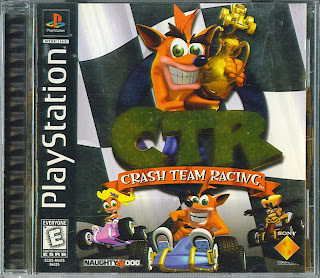 I haven't played any of the Crash Bandicoot games yet and I have only owned the original Super Mario Kart, which provided hundreds of hours of split screen kart combat mayhem once I finally convinced Krogenar that S.M.K. was not a kiddie game and was actually alot of fun.
Since SMK it seems like every franchise has attempted to cash in on the Kart Racing phenomenon... none till CTR have been close to being sucessful. Naughty Dog has made a Kart racing game that is just as fun as SMK with characters that are quirkier than Mario, Luigi, Princess Peach, Bowser and those guys.
CTR has many similarities on the surface to SMK but the game has much more to offer those willing to go the distance. CTR offers eight selectable characters: Crash, Coco, Pura, Polar, Dr. Neo Cortex, Tiny, Dr. N. Gin, and Dingodile.
CTR offers plenty of ways to play; Adventure (single player campaign), Time Trial and Battle Mode. The Adventure mode is basically the same as SMK but goes a little deeper, after beating a level you gain access to Relic Races which are basically time challenges, and CTR challenge races where you race against the CPU and need to also collect the letters C, T & R.
Time Trial is self explanatory....drive the best you can on a track to set the best time.
Battle Mode is exactly the same as SMK PvP using power ups to defeat your opponent, you can have up to 4 players via the multitap. 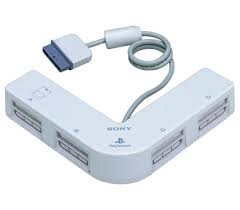 CTR is the only other worthwhile Kart game out there in my opinion and has much better tracks than SMK  (not all flat tracks)!
Imitation is the sincerest form of flattery and CTR takes the genre SMK created, uses the formula and kicks it up a few notches with over the top characters and solid gameplay a good soundtrack and a lot of enjoyable race tracks.


Posted by XxSITHappensxX at 4:29 PM No comments: 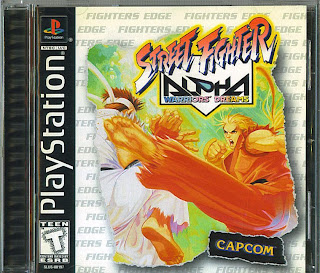 My first Street Fighter game on a home console since   Street Fighter II Turbo: Hyper Fighting on my SNES in 1993!
I only played this game a handful of times in the arcade and I was very happy to see it come to home consoles. The core aspects of Street Fighter are intact and in Street Fighter Alpha we are introduced to a few new techniques such as Alpha counters, a tiered super meter, air blocking and recovery rolls. These added aspects aren't just mindless additions but do enhance the strategic dynamics of the game.
SFA takes place before the original Street Fighter (1987) so we get a fresh look at Ryu and Kens humble beginnings....notice Ken's long hair? Notice what it's tied with? Notice Ryu's headband...what color is it! There are many references to The Street Fighter Animated Movie within SFA most notably are the shoto clones but also Chun Li has a fresh new look and probably the coolest addition to the roster is Guile's friend Charlie! Other cool fighters in the roster are Birdie from the original Street Fighter....this isn't the birdie from 1987, the only distinctive feature that was retained was his Mohawk, I like the new design for Birdie but some may have an issue with the redesign. Another Street Fighter Alum that gets the alpha treatment is Sagat's pupil Adon, Capcom did a great job updating this classic character.
SFA also brings two fighters from the Final Fight franchise Guy and Sodom, they fit perfectly in the Street Fighter universe with move sets taken from FF and enhanced to work in Street Fighter.
SFA also introduces two brand new characters Rose and Dan.
Rose is an interesting character, unlike the more traditional fighting styles Rose fights with her cleavage and a mystical scarf O.o
Dan is Capcom's response to SNK's Art of Fighting Ryo Sakazaki and is, for all intents and purposes a joke character.Dan's Back story is actually quite interesting as it ties into Sagat's storyline and why Sagat has an eye patch.
Sagat, M. Bison, and Akuma (returning from SSFIIT) are the final bosses in SFA and are character specific ie: M. Bison is Charlies final boss (for obvious reasons) Sagat is Dan's final boss Akuma is Ryu's final boss.
The graphics are fantastic and is almost an arcade perfect port, the sound track & effects are fantastic and sound amazing on a 5.1 surround sound home theater.
The new additions to the Street Fighter game engine are well implemented and add new depth to an already deep and strategical fighting system.
The cast is great and it's awesome to see characters from the original Street Fighter re imagined.

Being a fan of the franchise my review might be slightly biased, but I give Street Fighter Alpha
9/10
Posted by XxSITHappensxX at 6:03 PM No comments: 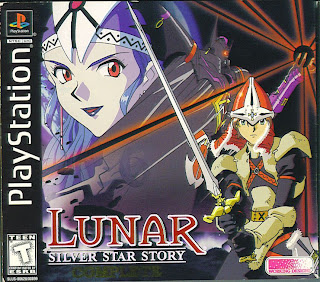 I bought the collectors edition of Lunar Silver Star Story complete on a whim. After playing Final Fantasy VII I was on an RPG binge and  I am so glad I did! What L:SSSC lacks in graphical power it more than makes up for in unforgettable characters, story and overall quality of the product! Working Designs put so much work into this port from the games gorgeous cut scenes to the soundtrack, the hardcover  instruction manual and cloth map to the sound track that this game should be in every RPG fans library!
Regardless if Alex's story is the most cliched in RPG history the sub plots and character development of the entire cast is so well developed that it really doesn't matter, but thankfully Lunar's story begins simply but excels to such fantastic heights....thanks to the incredibly well developed characters ...that it is a journey that you will not soon forget.
10/10 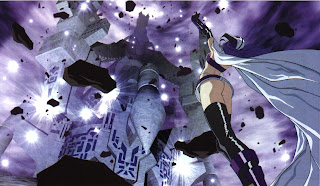 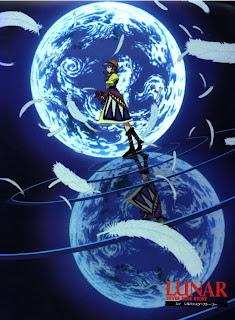 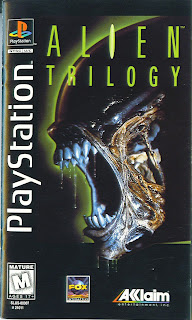 In space no one can hear you scream....in your living room they can!

Unlike most people who have been playing the FPS Doom, this is my first foray into the FPS genre. What better franchise to put into this genre! The controls took me a little while to get accustomed to but once i got comfortable moving, shooting, strafing and jumping the carnage really goes into overdrive, The learning curve is fair and by the end of the game you'll feel like one bad ass colonial marine or Ellen Ripley if you prefer playing as a chick (I highly doubt any girl is gonna play this).
The atmosphere is great and really draws the player into the game, there are times where the silence is so un-nerving and then there's times where the action is so intense you think you're chest is gonna explode....see what I did there?
The graphics are impressive as well as the sound effects, the video clips that are incorporated into the game add a smidge more beleivability  that you are on the Nostromo or on LV426 or the Sulaco.
The game is not easy and I'll admit I broke down towards the last chapter and put on my "pink acid boots"...
Any fan of the films will be impressed and FPS fans aught to check this game out!
9/10
Posted by XxSITHappensxX at 1:43 PM No comments:

Hello, thanks for dropping by!
This is my blog,Free Swim, how'd I come to that name for this blog? It goes back to when I was a kid. I went to camp as a child, it was a unique camp because to get there we didn't drive in a bus or car. A ferry would bring us to a small Island in the Long Island Sound, Calf Island if I remember correctly. Anyway Free Swim was always at the end of the day and we had the choice to either braving the trek down the barnacle encrusted rocky beach to the water or hanging out with friends on the beach. The choice was your's, kinda like this blog, you can hang out and read my postings...which could be as painful as walking on rocks covered in barnacles or not, either way the choice is your's.

Free Swim will focus on video games (yes another video game blog), movies (yeah those too) TV and all the nonsense that as a child I was told is rotting my brain....the good stuff! The Decultcure of the 21st century!

First thing I intend to do is bring over as much of my material from a site my friends Krogenar and Kopernikuz made, but is being shut down by the man! Just kidding, the owner of the site just has too much on his plate and the site never did take off like they hoped it would.

So the first couple posts on Free Swim will be "cut n paste" jobs from the now deceased please drivethrough.com. Oh and if you're interested in any of the topics I mentioned before and are interested in becoming a contributing author drop me a line. 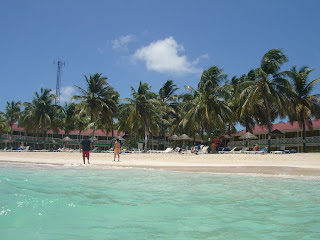 Posted by XxSITHappensxX at 11:31 AM No comments: