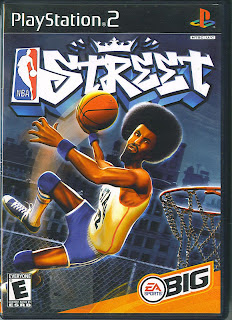 EA BIG is taking us from the powder to the blacktop with their own style basket ball game. This ain't the NBA, this is the Street, and if ain't got the skillz, ya gonna get schooled.
First thing you need to do is create yourself, the games player create mode is deep, choose a gender, pick you're nickname like "Main Event", "Queen B", "Predator" or "Terminator"...you know something that's gonna strike fear into the hearts of the other team lol.
From here on out you get 500 points to spread among height, weight, and the skills: 2 pt, 3 pt, dunks, power, blocks, steals, handle, and quicks. So you could have a 7'1" 265 lb player but you'll have 0 points to put towards the skillz. Then there's the look you want your baller to have, there's initially 6 different heads to choose from, 9 bodies and 8 different types of sneakers. As you progress thru the game more options will become available to help customize your player.
Alright dawg now grab two ballers from any of the 29 NBA teams and go forth and earn that nick name! As you advance through the City Circuit you will be able you add new players to your roster as well as drop ones to make room for more desirable players. STREET has 12 different venues, Beacon Hill, Pacific Blvd., South Beach, Broad St., Route 66, The Yard, The Cage, Venice Beach, The Loop, Yakatomi Plaza, Fort Point and Rucker Park http://en.wikipedia.org/wiki/Rucker_Park . As you play on these venues your skills will be put to the test against some of the local legends like Biggs, Bonafide, Drake, DJ, Takashi and Stretch. Each has a unique playing style and each comes with the attitude that a real street baller would have.
Whether you're playing solo against the CPU or against a friend in hold the court this game is so much fun and you don't need to be a super fan of basketball to appreciate this game! Street is brought to you by EA BIG the guys that brought us the snowboarding gem SSX! Street plays using similar controls, any combo of the four shoulder buttons + square will perform and advanced trick like "slip n slide" or the "down shift"...break some ankles yo! Or perform some sick aerial acrobatics with a super dunk like "Dinner's served" or hook it up with an alley oop to a super dunk to gain insane trick points and fill up the boost meter to unlock your "Game Breaker".
Street's controls are easy to get familiar with, especially if you've played SSX, the controls are are very responsive and the in-game physics are spot on...all things considered, the player models are BIG and expertly animated just like the SSX crew. The game is very well balanced in Hold the Court mode and a 3 on 3 game to 21 can be as exciting to play as watching the Knicks Vs. Bulls Finals from back in the day. Like SSX, Street has a quality soundtrack that fits perfectly with the atmosphere and isn't too heavy in one certain genre. And if you're good enuff you can even get Keily, Naturi and Adrienne from 3LW on your squad!
Other fun extras to find in Street is Moby Jones and Zoe Payne from SSX, Tracey Maretti from Sled Storm, NYC Legends Skip to my Lou, The Goods and Starbury.
Whether you're into sports games or not give NBA Street a try! You will have a ball :P
8/10
Posted by XxSITHappensxX at 7:08 PM No comments: