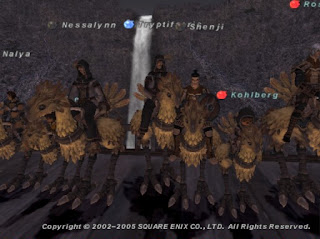 The other day I was hanging around the Bastok markets taking teleport requests and waiting for a PTY invite when I notice Jprimal announcing he's looking for people to do the Eco Warrior quest so I send him a tell and join. There were almost 2 whole PTY's in an alliance, and many of the members were laughably clueless! Where's the Gusgen mines? How much longer? Can we leave yet? How'd you roll dice? What's a telepoint? I can't afford to rent a chocobo....these were all tell tale signs of doom that I got to read for aprox an hour and a half while sitting around in Bastok. Some PT members had been waiting for over 2 hrs to begin the quest!Finally we all get our chocobos (because teleporting to DEM is too easy ) and set out for the Gusgen mines in the Konschat Highlands. The alliance, now 3 full PTY's strong stopped on the bridge to N. Gustaberg and we took some pics, unforunately I couldn't get a wide angle shot but there were 18 mounted chocobos on the bridge 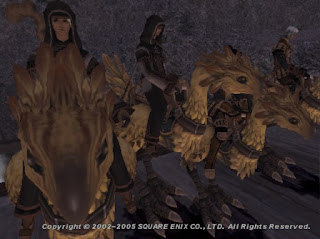 Basically the Eco Warrior quest is a 3 part quest, there's one in Bastok, San d'Oria, and Windurst and you earn 5k gill, 1k experience and a page from the Dragon Chronicals. For the Bastok E.W. quest we need to meet up with a Galka named Deega, a member of V.E.R.M.I.N, he'll ask if you want some sort of oil applied that will limit you to level 20. Since I'm now level 42 I had to go and buy back all my level 20 equip & a level 20 staff otherwise I'd be fighting in my jammies I don't think Jprimal was up to the task of leading 18 screaming children....how many times did I see "should I apply the ointment now?" and "how much longer?" or "Don't touch the ???" or "what's taking so long?". I just sat there and waited, and waited.....and waited for the better part of another hour! Finally the 18 of us lathered up and headed into the mines.....if you've ever seen a Capital One credit card commercial that's what we were like! Total chaos and confusion running around in the mines, stragglers getting attacked by mobs while others frantically tried to stay with the group because they didn't have the map. 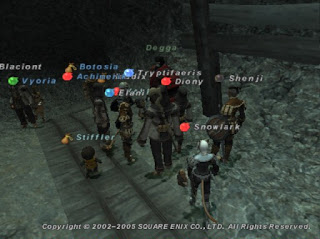 After much craziness we make it to an open area with an overturned mine cart, if you target the mine cart the ??? appear "don't touch the ???" unbelievably no one activated the ??? which releases the NM we volunteered to exterminate. Just when things were looking up Jprimal, leader of 18 rag tag adventurers goes AFK and the troops staged a mutiny after waiting hours, the slim oil was wearing off and soon we would have to start all over again. So a few (most) threatened to activate the ??? and release the NM (notorious monster)....someone did and it was a total bloodbath! HP meters drained like someone poured draino in them! I gave up on saving others and tried to make my escape but the NM Pudding wasn't about to let anyone escape.....we were all doomed. 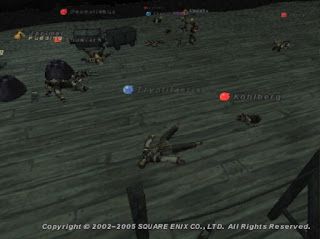 Posted by XxSITHappensxX at 3:56 PM No comments:

Mission 3, get Altair outta there!

After defeating the dragon and recieving rank3, I joined the Mithril musketeers in a Quadov slaughter in Beadeaux and helped Dayvad in Bastok mines get a rare material called Glocolite by killing Blind Moby in the Gusgen Mines.
My next mission for Bastok was arranged by Lucius in the Bastok Embassy in Ru'Lude Gardens atop Jeuno's tower.
I arrived with my letter of introduction, but my contact, Altair, had not yet returned from a visit to Delkfutt's Tower.
I asked Krogenar to join me once again in a matter of Bastok's security. We navigated our way to the 10th floor of the tower and defeated a Notorious Monster named Porphyrion, got the key to Delkfutt's Tower that would allow us access to the more dangerous areas, then headed to the basement. We found Altair unconscience behind a cermet door, when he came to, he told us he was attacked unawares and that we should wait for him back at the Embassy in Ru'Lude Gardens.
With this mission completed Tryptifaeris reaches rank 4 and my work for Bastok will continue via the Embassy in Jeuno.
Posted by XxSITHappensxX at 12:44 PM No comments: 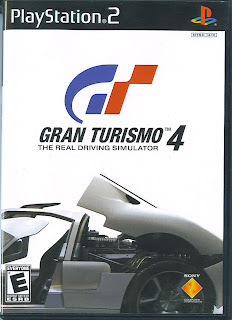 After the long wait I picked up Gran Turismo 4, got home poped it in the ol' PS2! As with each previous installment in Polyphony Digital's franchise the intro movie gets the player psyched to start racing with a rockin tune and some amazing video showcasing the wide spectrum of cars in the game.
The menu interface is laid out like a map with 3D icons for different points of interest similar to GT2 and GT3.
Lets start at Home. New to home is you're game diary which comes in handy to help you remember what the last thing you were doing because this isn't a game you'll finish in a week, or a month. Also new to home is photo mode which allows you to place cameras at differnt locations throughout a track during a replay and snap some sweet shots of your car and view them in the photo mode. The images are photo realistic and be saved to a usb storage device.
Another familiar area in GT4 is the License Center, like previous GT's you'll need to pass the tests to earn the A,B,IA,IB and Super license. One thing gone from GT3 is the Rally license.
The GT4 map has many new areas like the Driving Missions area. This is similar to the license center and has 34 missions in total to test your skills with predetermined auto's.
The Driving Park offers a cople tracks to help players familiarize themselves with how a newly acquired car handles.
The Jukebox is where you can preview the music from GT4 and customize what you'll be listening to during the races. There's like 60 something songs in there, everything from classical music to techno.
The Power and Speed area gives the virtual greese monkees two tracks to see how much power we can tweek out of our rides one track is the Las Vegas Drag Strip.
GT4 holds the gold trophy for the most tracks in any racing game I've ever played! The tracks are catagorized by,
Original Courses:
High Speed Ring
Mid Field
Grand Valley Speedway
Grand Valley East
Grand Valley West
Deep Forest Raceway
Trial Mountain
El Capitan - this is a new track located at Yosemite National Park
Autumn Ring
Autumn Ring Mini
Apricot Hill Raceway

Congrats if you made it thru that list! Now double it, because you can choose to race on most of them in reverse also!!!
Returning from it's hiatus in GT3 is the the Used Car Showroom, GT4 has 2 and a Historic Showroom as well.
GT4 seems a bit overwhelming at first with all the places on the map but it is well organized and won't take too long to get familiar with all GT4 has to offer. The events are also categorized under Begginer, Professional, and Extreme events, most will recognize the series regulars like the Sunday Cup or the Clubman Cup.
I'm glad to see that if you have GT3 save data you can transfer your A & B license and up to 100,000 credits, one time only! So be sure you check your GT3 save data to see that you have the maximum amount of transferable credits. Because these games are a labor of love and not being able to transfer even a little something from the previous one would feel like a slap in the face.
GT4 boasts around 700 cars that triples the car count of GT3! This is trully a car enthusiasts playground! I have seen articles from Road and Track and Import tuner on GT4. I have even heard that certain dealerships have the game in the waiting area for people to play while they wait for their repairs to be done. For those with high end AV equipment you can trully appreciate the beauty of GT4 with 480p and 1080i HD video and Dolby Prologic II audio.
Gran Turismo is more than just another racing game, it's a car aficionado's wet dream. The fact that GT4 has such a vast spectrum of automobiles from the GT-ONE Race Car (TS020)to the 1915 Ford: Model T Tourer , shows that Kazunori and his team at Polyphony Digital look at automobiles as peices of artwork in motion not a greasy machine that gets people from point A to point B.
With all that GT4 offers regrettibly it does have one HUGE rusty dent....the one thing that could've made GT4 trully the "drive of your life"....Online play! Yes GT4 is gorgeous, yes GT4 has alot of tracks, yes GT has a huge selection of cars to choose from BUT it all seems painfully repetative. Like I mentioned earlier the Gran Turismo titles cater to hardcore racing game fans and are attractive to the casual gamer but this is the forth time around collecting cars from races that can be as short as 5 minutes to as long as over an hour. The payoff would've been taking that Aston Martin DB7 Vantage and racing your friend from Japan in his Deso Sard Supra and sharing the replay with other online. 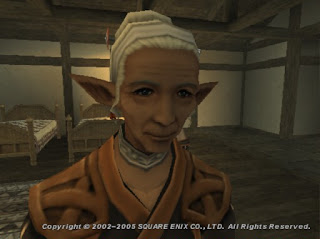 While in San d' Oria I finished up a few more quests to help build my fame there, one such quest had me helping some wrinkly old elvaan woman. She asked me to get her some Selbina milk.

As I went to hunt Stray Mary, I ran into Lumbering Lambert, I asked if he's seen Mary. He had not >.> 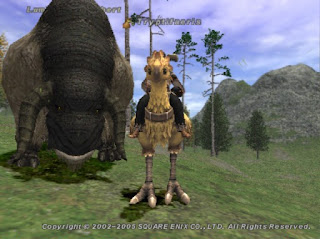 I reached the Konschat Highlands and did some sheep hurting (hee hee). Still Mary didn't show, so I went to the auction house and bought the milk, after geting my reward I made a small profit. 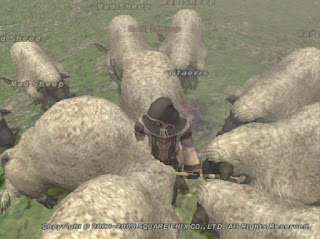 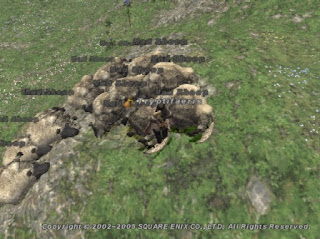 Posted by XxSITHappensxX at 3:45 PM No comments: