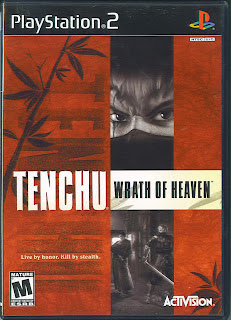 Live by Honor. Kill by Stealth.That's the name of the game with Tenchu:WoH, the third installment in the series. When this game first appeared on the PS1 it was overshadowed by another stealth game, Metal Gear Solid, unfortunately Ayame & Rikimaru couldn't compete with Solid Snake. A few years later and a new console This ninja duo reappear in a game that from title screen to ending credits is simply beautiful!I'm not gonna give you the synopsis of the story, but basically you choose one of two playable characters and thru stealth you kill your enemies to reach Tenrai an evil ??? who is trying to conquer 16th century Japan by collecting three mysterious stones (Earth, Heaven, Fire).I was extremely inpressed with Activisions attention to detail! The level designs are gorgeous, with incredible partical effects such as glowing candles in caverns, snow falling in the bamboo forest, and the way leaves danced around in temple courtyards. The sound and music are right on and add to the entire experience.Tenchu also does a great job with your Ki meter (stealth meter), this little meter is crucial if you plan on getting any where in this game! I tells you which direction your foe is walking, what pace he is moving at, and how aware or unaware he/she is of your presence. Your Ki meter will help you perform stealth kilss on those poor unsuspecting guards around a corner, speaking of stealth kills....WOW Now that is COOL! I've leapt off a cliff wrapped my legs around a guard a twisted his head around 180 degrees then launched off his corpse while kicking in his head! Here's where some people have issues with the game.....enemy AI (some bosses have pathetically obvious patterns) , personally I found the game well rounded in this area I only wish there was a greater variety of "human" enemies. Those undead zombie dawrves are insanely eery! As you progress thru the game you collect new ninja items like caltrops, poison rice balls, shurikens, new daggers and swords, fireworks (distraction), and new ninja abilities like cling to ceiling (limited time) new killing techniques and more! The game has more than enough replay value with mission scoring and 3 versions of each level, 2 different characters and 1 unlockable character with intertwining stories, a co-op mode for you and your ninja buddy, and a versus mode as well! All in all well worth the 50 bucks.
8/10
Posted by XxSITHappensxX at 5:17 PM No comments: