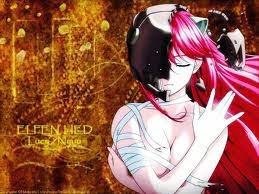 I finally got around to watching Elfen Lied, very interesting series. I haven't read the manga but from what I know the Anime touches on most of the issues from the manga to some degree.
I'll advise those who haven't seen Elfen Lied yet, Lucy makes Golgo 13 look like bambi!
The degree of violence in this series is staggering but it isn't mindless for the sake of violence. Elfen Lied touches on some quite mature subject matter, that is regrettably undermined by the character design. This is no way a dig on the genre but I was not feeling the design of Kohta, Yuka and Nana, I wish they had a more mature design similar to Cowboy Bebop or Samurai Champloo.
One of the theme's that really really struck a cord with me is how children can be so cruel to their peers if they perceive any type of difference and how it can so negatively affect their personality and destroy their view the world through a child's eyes. In this case little Lucy appears human except for the two horns on her head that resemble cat ears...talk about fuel for childhood cruelty!

The series also touches on ALOT of topics such as discrimination, rape, trust, aliens and government conspiracies, split personality, suppressed memories, love triangles, animal cruelty....all this in 13 episodes!
One last thing that I had a problem with was the intro....it is so beautiful, it is somewhat misleading when compared to the series visual style.
All in all an average anime series that felt a bit disjointed and could've benefited from  an additional 6 episodes. A beautiful intro, mature themes but the character design was weak in my opinion.

Posted by XxSITHappensxX at 6:39 PM No comments: