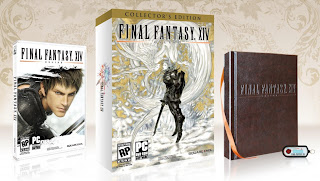 FINAL FANTASY XIV takes the first intrepid steps into an unknown realm, and in doing so a new place for adventurers of all creeds to call home is born — Eorzea.
In the world of Hydaelyn, the term Eorzea denotes the geographical region comprised of the continent of Aldenard and its surrounding islands, as well as the civilization which spawned there. Calling the area home are several independent city-states,the most notable being Limsa Lominsa, bustling port and pirate hub; Ul’dah, a desert city rich in mineral wealth; Gridania, nested deep within an ageless wood; and Ishgard, bastion atop the mountains.
Throughout the realm can be found climates both harsh and mild, as diverse as the skies are vast. Bleak, desolate landscapes stretch to uncharted horizons, their uninviting expanses yet to be traversed. Colossal monstrosities stalk the land, as if mountains primeval had somehow stirred and risen. Of all the things Eorzea may be said to be, hospitable is not among them.
In the past, the city-states battled tirelessly, vying for domination and hegemony. Death-mongering beast tribes molested the land unchecked, leaving only destruction in their wake. Unseen enemies lurked beyond the borders, striking at the slightest provocation or show of weakness. The history of Eorzea is a tapestry woven of war and strife, stained with the blood of those gone before, and the tears and ash of fallen endeavor.
And yet the love the gods bear this unforgiving land endures, now as always. What is the allure of this seemingly forsaken place? With what hope and to what end do would-be inhabitants journey here to live out their days?
The answer lies with that which gives form to Hydaelyn and all myriad creation in it—crystals. The cornerstone of all things,it is these crystallized manifestations of the aether that beckon the people to come, risking all in the undertaking.
And so it is that adventurers too have harkened the call—to bear witnessto the epic set to unfold in this land. This Eorzea. 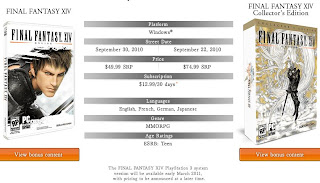 Posted by XxSITHappensxX at 12:09 PM No comments: 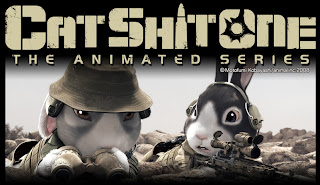 Posted by XxSITHappensxX at 4:24 PM No comments:

Email ThisBlogThis!Share to TwitterShare to FacebookShare to Pinterest
Labels: Cat Shit One, Movies

The party's over and now it's time to sift thru all the announcements and demo's and give you our 2 cents. What we liked, what we thought was epic and what was a steaming pile of excrement...

I enjoyed Sony's press conference the most of the three, maybe I was swayed by Kevin Butler's speech, maybe it was the "surprise" announcement at the end..

Nintendo had an impressive showing this year with a strong lineup of titles to showcase for the Wii and then the 3DS on top of that was fantastic.

In comparison I was not that impressed with Microsoft's E3 presentation this year, and I would have to point the finger directly at the Kinect demo of the little girl "interacting" with the tiger in the Kinectimals show. I'm calling bravo Sierra on that whole demonstration! Even if the girl's hand motions were being trully transfered to the on screen tiger (I don't think so) where's the fun in that!? And the demonstration with the guys looking at....nothing but the camera angle of the on screen Lambo changed...whawhat!? Who cares! The Kinect games looked like they belonged on the Wii (no offense Nintendophiles).

This was shown at last years E3 and I'm very excited that this title may actually be the CastleVania we've been longing for since SotN!

I loved TM2 and TMB so I was psyched to see Sweet Tooth roll out on Stage at the end of Sony's presentaton! The Nuke mode looks good if you're into strategy...me, I prefer straight up death match. Seeing Sweet Tooth on a motorcycle was odd, I hope Mr. Grim gets his own faction and let's see Calypso and Warthog!!

Fighting games have made a super comeback this year and with the announcement of MVC3 the fighting game community has yet another reason to collectively throw their fists in the air! The trailer is full of win, and the gameplay looks like it hasn't lost it's over the top pace or action and the games subtitle is just another clue that Capcom knows they have a smash hit on the horizon!
Not to be greedy but it would be ultra sweet if Capcom has been secretly working on a new Dark Stalkers game using the SSFIV engine

I was really impressed with the first Dead Space...in retrospect survival horror in space is a no brainer, I can't wait to see if Issac Clarke is as bat shit crazy we think...

The demo that was shown looked amazing and the integration of 3D into certain aspects I think will only enhance the experience. I don't think Guerilla needs to call Killzone the Halo killer anymore, I think Halo is doing just fine killing itself...

I spent over three years in Vana Diel and truly enjoyed it. Eorzea looks eerily familiar but that is by no means a bad thing, Square's first MMO was gorgeous and well massive! The temptation to begin anew in Eorzea with Tryptifaeris the Elvaan Summoner, White/Black Mage is strong. FFXIV looks to take the best of FFXI and build on it!

As Kevin Butler requested I'm not gonna hate on this new peripheral, I have the PS Eye already so I might pick up the move controller and see if my wife; who totally hates video games enjoys the move games. That's the real test for me, if my wife enjoys PS Move games it may succeed. I was not impressed with the games they demoed for PS move...

The Fight...obviously inspired by Wii Sports boxing...I don't think casual/non gamers will be attracted to it due to the "dirty" violent look of it. Also with boxing you can only use your fists so 2 Wii motes works, but with a street fight there are no rules so how can 1 PS move controller make you kick, headbut, grab and throw?

Start the Party... Hey cool Mario Party on the Pla...hey wait a sec! Should've been named Playstation Party. Mom and Dad will enjoy this one while at their parties...

Tumble..Hey it's jenga without the thrill of wooden blocks crashing all over the kitchen floor and waking grandpa!

Heroes on the move...A Playstation Mascot mashup platformer utilizing the PSMove controller, this could be fun.

They should have shown Ape Escape 3D with PSMove controls and why hasn't anyone thought to use these motion controllers in a Pictionary style game!? Scribblenauts anyone??? And how about a Jedi Academy lightsaber duel game!!!

PS+ is epic fail in my opinion. Allow me to explain my feelings, cross game chat is a feature that should've been patched in a long time ago. The PS3 is capable of it and there's no way I'd pay for that. Next, paying for access to early demo's and DLC is a testament to the ADD and pure impatience of those of us who can't wait another few days/weeks for it. Paying for "premiere" customer service is just disgraceful! Paying for this cloud backup service is for people who don't know any better....go buy a larger HDD or external HD! Automatic Download of patches!?? Really? How hard is it to go to the cross media bar then to settings and then check that the most current firmware is installed. Seriously, I find PS+ a real slap in the face to the gaming community Kevin Butler addressed at Sony's E3 presentation! And $50

a year for that...are you smoking crack Sony!? The only thing that would make PS+ worthwhile in my mind is if they had "premium servers" that provided a noticeable improvement in online multiplayer games....I'm talking about lag and connectivity issues being absolutely non existent

This trailer and the one from last year really makes me wish Bioware had written, directed and produce the prequels! Ugh. These trailers are so friggin epic the MMO can't possibly live up to the hype.

The Legend of Zelda: Skyward Sword

I haven't played a Zelda game since A Link to the Past, so my opinion really doesn't mean a thing, but why does link commit suicide at the end of the trailer!? O.o Does Skyward Sword pull an MGS2? Will Raiden save Hyrule?

This one's a bit weird for me, yes back in the day the N64 had a smash hit FPS with Goldeneye, but we've come along way since then and the top dog in FPS's is the Call of Duty franchise. And the bond movies have also come along way since Pierce Brosnan...This game may be fantastic exclusive for the Wii but why name it Golden Eye??? And if you're gonna make a new Golden Eye FPS why is Daniel Craig playing bond and not Pierce Brosnan....contracts probably?

OMG Samus just discovered she has another mother! Nintendo really brought out all their A list franchises this year for E3!

Another Nintendo franchise favorite for the Wii, I really enjoyed Super Mario Wii and I expect that DKC Wii will have the same level of fun!

I love games that break the graphics mold! Games such as Valkyria Chronicals and Okami. Nintendo has always had very clean smooth visuals and Kirby's Epic Yarn looks to keep the superb visual standards and the gameplay looks very fun for gamers from 9 to 59....ok maybe 49.

If Nintendo's lineup for the Wii wasn't impressive enough, they really unleashed a FTW bomb with the 3DS! The hand held has a massive list of 3rd party support from big name publishers like Capcom, Konami, Harmonix Namco, Sega, Square Enix, Ubi Soft and more! And the demo's shown were fascinating, no 3D glasses required...what kind of mystical tomfoolery is going on inside that little thing!?

I've never played Halo, but from the below video, it appears that the FPS is trying to expand into new territory. Personally I prefer bullets and grenades to lasers and shields...but to each their own.

So I watched Microsoft's Kinect presentation with Kinectimals, the little girl really acted well...OMG pretending to pet a baby tiger how kawaii! BARF!!! Go save a cat or dog from a shelter and play with it IRL!

The Biggest Loser: Ultimate Workout...First, no gamer's goal is to be the biggest loser, second what are you saying about the people buying this "game"

Kinect Joyride...Makes you looks like you're having a seizure >.<>...Another carbon copy of Wii Sports

Kinectimals...the Crocodile Hunter is rolling in his grave

Your Shape: Fitness Evolved...WTF is this!? What guy is gonna let their girl use his XBox for this!?

Microsoft revealed the new "future ready" 360 slim, that has replaced the old model. Aesthetically I prefer the original...but that's just my personal opinion. The new 360 seems to have improved on many aspects the original struggled with such as overheating...whicj lead to other problems, noise reduction and the dreaded RRoD. I'm not entirely sure they solved the cause of the RRoD but apparently the new 360 shuts down automatically when it's internal temp get too high. I hope it auto saves your progress before hand. 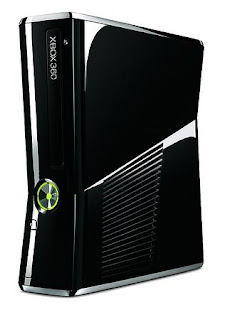 
Final Fantasy Tactics: The War of the Lions

I played this on the PS1 and trust me, if you enjoy the Final Fantasy games and are mildy into strategy RPG's this game is worth it's price in Gill twice over!


Posted by XxSITHappensxX at 1:44 PM No comments: 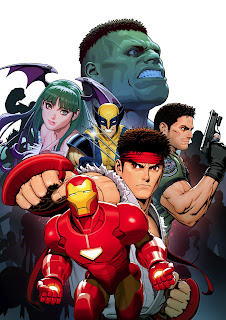 Posted by XxSITHappensxX at 1:23 PM No comments: