8 months we've been waiting and today Steam leaked the trailer for the first 3 characters, are you serious?! This is ridiculous, Kage was leaked hours prior @ Capcom Cup and now the next 3 characters leaked  DAYS before EVO. These 3 characters are MONTHS late and for those of us who have been holding out hope that there was something coming this great news but there's something in my mind saying "that's it?". There has to be something else that caused Capcom to fall into radio silence for 8 months! If this was an executive decision to delay these characters and not keep open lines of communication someone needs to be fired.
I guess we'll find out Sunday night if there's "Much More" for us.
Now as far as the 3 characters are concerned
Honda: Meh some people will be glad he finally made it, others will be like why the F did you fuck up Vega and Birdie and leave Honda unchanged!
Lucia: Well X-Kira was absolutely right, NO ONE would've guessed this character from Final Fight 3 was coming!
Poison: Shoulda just made it Roxy, but regardless he's back. I like the whip swing, the Belmonts are impressed!
I have to admit if that's all we're getting regarding season 4 I'm not feeling any excitement at all!
So these 3 will be available on the 4th for $5.99 or 100k FM each or you can get em all on the 5th for $14.99 and save $2.98 that you can put towards Honda's Stage which costs $3.99 or 70k FM.

Posted by XxSITHappensxX at 11:00 PM No comments:

Another year another EVO approaches in 6 days, and what many in the FGC are wondering what does Capcom have in store for Street Fighter V? I've been playing SFV since launch and I have to admit, for the last month I really haven't felt much of an urge to play. Herein lies the problem with games as a service plan! When the players get accustomed to scheduled updates with new content and then the updates just go on hiatus the player base losses interest regardless if the game is solid and has plenty of content. Since it's launch there was a plan for updates and new content which was relatively reliable....until season 3 concluded 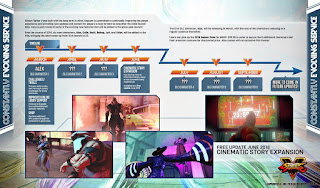 Dec 16th 2018 with Capcom Cup. It's now almost August 2019, 8 months later and we've got 1 new DLC character a shotoclone-clone, Kage. And a some random DLC like Field of Fate,  Ring of Justice, Suzaku Castle @ night (should be free if you bought the Suzaku Stage @ day DLC!), Kage monocle costume, and Sagat dew rag costume which is included in the CPT 2019 bundle, and a couple crossover costumes like Katt for Falke, Shade for Sagat, Devilotte for Menat.

This time last year we had Sakura in Jan, Blanka in Feb, Falke in April, Cody in June! And Sagat AND G released August 18th!
So I understand why so many have said SFV is "dead", Capcom isn't doing themselves any favors by going radio silent these last 7 months.
The question in my mind is HOW?
HOW will Ono and the SFV dev team resuscitate SFV?
HOW many characters are we getting revealed Sunday August 4th?
HOW much new content will we be getting, HOW much will this cost?
HOW will players be able to purchase the new characters aside from real money since FM seems to be a dead form of E-currency?
With PS5 launching holiday 2020 HOW can Ono say he doesn't have any SFVI news for EVO 2019....

Posted by XxSITHappensxX at 11:39 AM No comments:

Admit it you wanna see this face off, the ST has been depressing lackluster when it comes to GOOD light saber fights!
Rian Johnson should have consulted with these guys, there was way too much "So You Think You Can Dance" with the Praetorian guards Vs Rey & Kylo in TLJ!

Posted by XxSITHappensxX at 5:34 PM No comments: