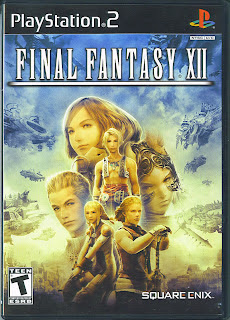 Posted by XxSITHappensxX at 2:06 PM 2 comments: 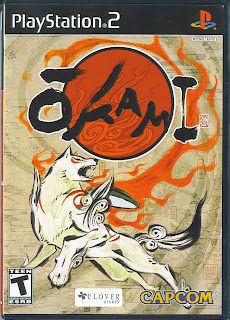 Beauty is in the eye of the beholder, but you'd be hard pressed to find a more aesthetically impressive game. The game is fairly straight forward, you play Amaterasu Okami the reincarnation of Shiranui the white wolf that fought alongside Nagi 100 years ago to protect Kamiki village from the demon Orochi.
The pen is mightier than the sword...
Okami is accompanied by Issun on his journey thru Nippon to restore beauty and revive cursed lands. In order to accomplish this Okami must master the hidden arts of the celestial brush. Thru your travels Okami will be blessed by other gods with new brush techniques that literally transform the envirnoment you are in. By holding R1 you access the brush and holding triangle or square, useing the left analog stick Okami can transform her surroundings to restore beauty and wildlife to the area.
As Amaterasu restores the land she gains praise from the land, when she helps an NPC like Kushi, the sake brewer, she'll gain praise, or when Amaterasu shares her food with the animals of the lands. These praise points can be used to boost Amaterasu's attributes like health, ink jars..the more ink jars the longer you can use the celestial brush. Praise points can also be used to increase her astral pouch...how much food she can carry, a finally praise points can increase Amaterasu's purse.
As I mentioned earlier Okami is accompanied by Issun thru her journey thru Nippon, Issun's gender is never determined. Issun travels with Amaterasu to learn to secret techiniques of the celestial brush. Issun acts as a guide for the player as well as comic relief. The dialog is smart and witty even though some times the conversations seemed childish. The NPC's seem a bit childish but upon further research many of them actually are from native Japanese religion, Shinto. http://en.wikipedia.org/wiki/Shinto
Amaterasu is portrayed as the sun goddess in Shinto and many other characters in the game stem from Shinto.
So for those parents who believe nothing beneficial comes from video games I would say give your son or daughter this game, they might actually learn something interesting if they get into Okami. This brings me to my next point, Okami didn't sell to well here in the states unforunately, most likely because the game is so heavily influenced by Japanese lore many kids here will not be able to connect with it. It's kind of sad that American kids are more likely to pick up Halo, Socom, or Ghost Recon than a game like Okami that isn't just beautiful but fun if you're willing to give it a try.
The only issue I have with Okami is there are times where I can't fiqure out what I'm supposed to be doing to proceed. There is an ingame log book which will come in handy if you put this game on the back burner for a few weeks. There's also a beastiary and animal tome that logs all the different animals you've feed thruout the game. The Music is subtle yet as beautiful as the games visuals. The battles in the game are very easy especially once you are familiar with the celestial brush, the boss fights however are far more interesting and challenging, making the player use the techinques learned. There's also plenty of secrets in the game that are worthwhile to uncover.
8/10

Posted by XxSITHappensxX at 5:33 AM No comments: