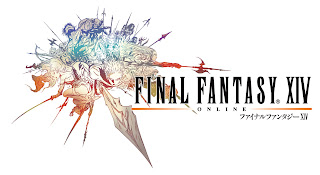 Posted by XxSITHappensxX at 7:50 AM No comments: 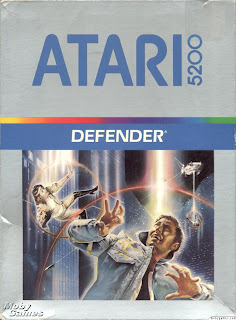 You're the Captain of the Spaceship Defender, and your mission is to save the humanoids from alien abduction. Use your radar scanner, smart bombs, and hyperspace power to protect the planet from alien assault. If the aliens successfully abduct the humanoids, the humanoids mutate, joining the alien forces. You must act quickly to prevent total destruction of your planet.
I got Defender for my 9th birthday for the Atari 5200, the graphics and sound effects were far better than the 2600 version. Compared to todays games like Ace Combat, and H.A.W.X it is primative but the game is the forefather of side scrolling shooters. Defender had some unique features that make it a classic and an innovator for future games, features such as the mini map at the top of the screen that showed your current relative location on the map, the abilty to change directions, and the fact that the player had multiple objectives...shoot the aliens and or rescue the juicy colonists daughters. These features would be incorporated in future games such as Gradius, Soviet Strike, R-Type.
8/10

Posted by XxSITHappensxX at 2:24 PM No comments:

I hate you George Lucas! I bought the original unedited starwars trilogy on VHS back in the early 90's, then I bought the "digitally remastered" version of the OT with the "lost Jabba scene" in the ESB in the late 90's
Then I bought TPM, AotC and RotS. I swore I was done, I was free from Lucas Arts commercial tractor beam, but apparently the hyper drive on my wallet was never fixed....
At celebration V this weekend Lucas Arts announced the Star Wars Saga is coming to Blu Ray....and of course there's more "recovered footage" that will show up in this version. See below.
I'm a bit skeptical about this "recently discovered" footage, honestly you can't tell that's Luke Skywalker visually, it's just shadows and I don't recall him having such a large cleft in his chin... 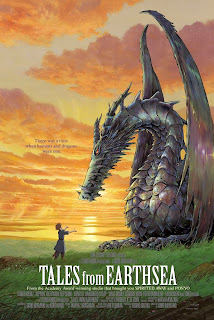 The latest film from Studio Ghibli (Princess Mononoke, Ponyo, Spirited Away) opens today with limited release.
If you're interested in seeing Tales from Earthsea on the silver screen, it's playing at the Angelika Film Center down on 18 West Houston St. @ Mercer St. NYC 212-995-2000 or via the interwebs @ http://angelikafilmcenter.com/angelika_index.asp?hID=1 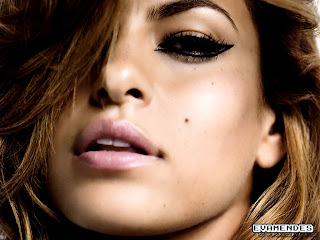 Thanks Eva!
Your S.ex tape really helped with my nastiest, dirtiest jobs, it even helped my untreated wood!
It also worked on my wet pipes and saved my lubricated rods! This one time I had a hard job where I was working in a hard position and your s.ex tape really came thru!
No hard working man should be without your s.ex tape, I love your tape so much I bought 2! 'cause ya never know when you're gonna need a little extra hold..
Order your's today at http://www.funnyordie.com/videos/0a4d42beff/eva-mendes-sex-tape?rel=player&playlist=318702

Posted by XxSITHappensxX at 8:56 PM No comments:

OK that trailer was crazy, like something from a bad dream...
Are we to expect that we're leaving the fish tank behind to find a new environment for Rapture?

Posted by XxSITHappensxX at 11:55 AM No comments: 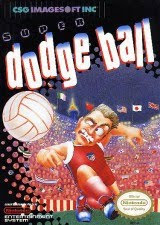 Another trip down memory lane! 1989
Super Dodge ball was one of my favorite "sports" games for the NES....who doesn't love dodgeball!?
Super dodgeball had two modes, the first was World Tour Mode where you controlled Team USA and battled teams from around the world like England, India, Africa, Iceland, Japan, and the USSR.
The second mode was a versus mode where you could go head to head against a friend.
The game was simple fun that became immensly more enjoyable when played with a friend. I remember choosing the Indian team and playing against a friend and talking trash with an Indian accent.
This game actually may have been the inspiration for some aspects of 1992's Arcade Smash Street Fighter II: The World Warrior. Both games have you traveling around the world fighting people from different countries, and both games gave unique special attacks to the representative of their country.
I don't think Tecmos is around any longer but there is definately potential for an online multiplayer sequel here! Character creation, customizable uniforms, special moves, "super moves"....see where I'm going with this folks!? Super Dodgeball II: Balls of Fury

Posted by XxSITHappensxX at 6:01 PM No comments: 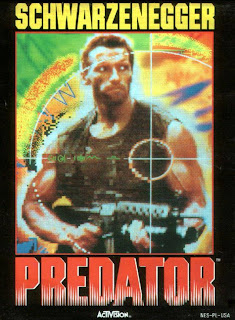 Seems I'm stuck in the 80's this week...
Another game I had for the NES was Activision's Predator, the first game I ever had based on a movie and well we all know now how well those turns out...
The game put Dutch in a pair of pink pants and had him run thru 30 stages of platforms...sounds fun no? To break the redundancy up a bit each stage has two modes! Side scrolling platformer (Jungle Mode) and a side scrolling zone versus waves of floating orbs and a Predator (Big Mode).
That's it....
No jungle slip n slide of a cliff
No giant vagina jokes
No cigar
No booby traps
No sneaking
No getting to the choppah
I bought this game slid it into the NES and I was transported to a world of hurt

Posted by XxSITHappensxX at 4:33 PM 2 comments: 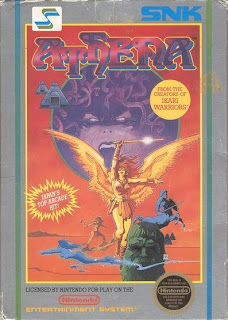 Long before Kratos went postal on Zeus and the gods on Mt. Olympus Athena was battling "strange and fearsome creatures" on the NES.

Athena is a side scrolling platformer that has the player fighting enemies and "breaking bricks" to pick up armor and weapon upgrades. There were four weapon types Club, Arrow, Magic and Blade. The first three had three levels of strength the Sword had a forth level.
Athena can pick up Armor, Helmets and Shields to protect her against the "strange and fearsome creatures" in the game.
The game also has many items Athena can use to help her such as Pegasus wings, Harp of Protection and umm a Sailor Fuku O.o and a few that actually make the game even more infuriatingly difficult like the Broken hourglass, Goblin Hand and Skull Shield.
SNK could've had a decent game here if there was some QA involved, but regrettably this game suffered tremendously because of non existant hit detection, incredibly poor enemy AI and a zero tolerance learning curve.
The graphics were decent for the time, and the levels had enough variety to keep the player from feeling the repetitious nature of the game. The boss's were large and hard as hell if you came unprepared. Getting to the boss's was challenging enough, if you died you were whisked back to the start of the level with none of your equipment or weapons.
Athena has eight worlds to play thru (good luck!) and the final world actually incorporates a game mechanic any Megaman fan will instantly recognize, the final world in Athena has the player battle all 7 previous boss's in short succession before finally facing the final boss Dante.
The story itself is absolutely ridiculous...a goddess gets bored living in a castle and sneaks out to fight "strange and fearsome creatures". Not exactly Edipus Rex...
Later Athena made the transition from platformer to fighting game vixen in SNK's KOF franchise.
Athena's debut game gets a 3/10 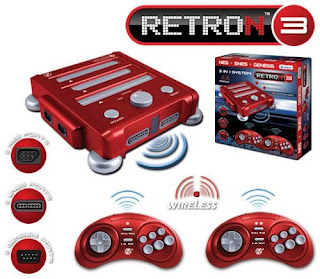 Introducing the RetroN3 game console from Hyperkin. For little more than the cost of a PS3/Xbox360 game you can relive your 8/16 bit glory days!
The RetroN3 supports many NES, SNES and Genesis games, has 2 controller ports for each of the 3 systems and comes with 2 wireless controllers designed after the Genesis controller.
I hope this console does well, the design alone shows that some thought was put into it and that there are people out there who still play these games. In todays day and age though this console will have a difficult time selling because it really caters to a small niche market, the retro gamer that has their entire library of NES, SNES and Genesis cartridges. Most people have emulators of these games. The other issue is where are consumers going to be able to find the games if they wanted to play them? Since Funcoland was merged into Gamestop back in 2000 I really have no idea where to find retro games anymore. Regrettibly your best bet to find retro games is the interbebs like craigslist or ebay. I did find one site online that looks promising: http://www.consolepassion.co.uk/ but it's from the UK so you're gonna have to pay S&H on top of the cost of the game cart.
The RetroN3 is a terrific gift for that retro gamer or any gamer that wants to go old school but can't DL the game onPSN, XBL or Wii marketplace.
Hyperkin website: http://hyperkin.com/index.php/retro-system-retron-3.html/

You must defeat Sheng Long to stand a chance...so that's what Ryu was talking about! 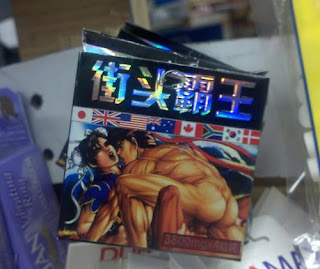 Navigating the uncharted regions of the interwebs is treacherous and somes you come across things that just cannot be explained or unseen...this is one of those things!

This just more evidence to coroborate the long running rumor that Ryu's been tappin' the strongest woman in the world since 1992!
As further proof I give this! This is why fanfic is an abomination from the deepest pits of hell! 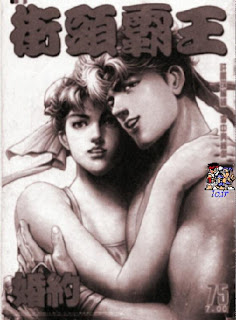 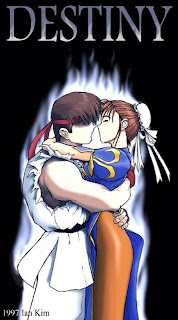 Posted by XxSITHappensxX at 4:46 PM No comments:

American Idol The End is Nigh!

REJOYCE!!
The ONLY reason I'm posting about American Idol is to spread the good word, that after almost a decade of oppression, the crap that is American Idol may finally be coming to an end!! With Simon Cowel no longer a "judge" and now comes word that Ellen Degeneres has quit and Kara DiAwhatshername got the boot! So now it's time for Seacrust out and Randy will follow shortly afterwards!
Next miracle will be to get America's got Talent, Dancing with the Stars, and all the other excrement off the air!
Posted by XxSITHappensxX at 10:25 AM No comments: