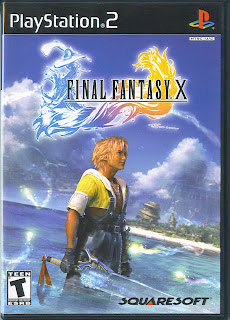 Welcome to the booming Metropolis of Zanarkand! Home of the Zanarkand Abes Blitzball team, and their all star player Tidus, son of the former superstar blitzer Ject. For Squares 10th game (X) in the Final Fantasy series they really veered off in a completely different direction from your traditional RPG. In fact you can pretty much set any preconcieved notions for Final Fantasy to the side, in FFX there are no kingdoms in far far away lands, brave knights, magic crystals, princesses being kidnapped, time warping Sorceresses, or spikey haired guys w/ amnesia blowing up reactors, or crazy clowns killing summons and stuff. This game is much more personal with a likeable cast of characters that are (finally) well fleshed out.This game flows very much like Star Wars A New Hope. We start out with Tidus, a bright eyed adolescent boy who is suddenly whisked off on an adventure by a mysterious older man, Auron, who's been watching over him since he was a boy.Tidus awakens in an unfamiliar land, after being abuducted by a group that he can't understand on a salvage ship and escaping he washes up on the shore of a tropical paradise quite different from the city's of Zanarkand. This is where Tidus meets up with Yuna, daughter of High Summoner Braska who defeated Sin 10 years earlier with his guardians Auron and.....Ject, "the circle is now complete" This is where the story begins, Yuna is about to set out on her pilgrimage to become a summoner, accompanying her is Lulu who acts as Yuna's older sister, Kamahri Yuna's version of Chewbacca, and Wakka a Blitzball player who is the first to find Tidus. Thru Yuna's pilgrimage you learn about the religion of Yu Yevon, and the relationship between Yuna and Tidus blooms. Unlike FFVIII the romance between Yuna and Tidus seemed more genuine, perhaps because Tidus, aside from his choice in clothes, seemed more......normal.Right from the start you realize this isn't your traditional Final Fantasy, aside from the brighter pallet seen throughout the game and the rock music that fully utilizes your home theater's surround sound system. Other significant alterations to the FF engine are the good ol level system which is is enhanced by the sphere grid. The sphere grid resembles a constellation map, each of the party members starts in a different location on the map, after defeating creatures each member who participated in the fight gains Sphere points which can be used to advance thru the sphere grid (connect the dots). When plotting your course on the grid it is important to plan ahead, do you want the MP bonus or the new ability? Because you may find a fork in the grid and you don't have enough sphere points to get one then double back for the other. The idea is a nice way of making the leveling process more in your control in a more interactive way than watching numbers tally up. With more focus on individual leveling and sphere grid advancement per participating party members FFX allows manual swapping of active members during battle. That way each member can attain GP (grid points).In order to keep your party balanced it is important to ensure each member advances on the grid at an even pace, to do this FFX allows you to do something you could never do in any previous FF's, swap out party memebers mid fight, so in theory each member can contribute to the fight and recieve grid points. Final Fantasy X is a much more linear title than previous versions and much more personal. Instead of saving the whole planet from utter annihilation Tidus, LuLu, Wakka and Kamahri band together and set out on Yuna's pilgrimage, along the way they each must overcome their own personal challenges. Square delivers another gorgeous game, the most obvious change is the color pallet used throughout the game, the colors are vibrant and a nice change from the earth tones we're used to seeing in RPG's. The music is a far cry from the traditional Final Fantasy soundtrack, the hard rock theme of Zanarkand from the games begining screams "THIS AIN'T YOUR OLDER BROTHERS FF!"The sphere grid is a nice change from the traditional "reach a level and gain a new ability automatically. Now you have to make the choice of either going for that next spell/ability or grabbing the HP/MP boost instead. And one of the boldest changes to the series FFX is the first in the series to have total voice acting throughout the game. No text boxs with poorly localized translations here.The only aspect I was pretty let down about was the mini game, Blitzball. For Final Fantasy Fans a sports mini game in an RPG is like oil and water. I really enjoyed the card games of FFVIII and FFIX. Try as I did I just couldn't get into the game.FFX is another chocobo feather in Squares pointy hat! A quality story with drama, that touchs on topics of faith and religion, love, the relationship between a father and son, pride and prejudice, and multi culturism. WOW all that in a game and it's still enjoyable!

Game Review: Capcom vs. SNK 2: Mark of the Millennium 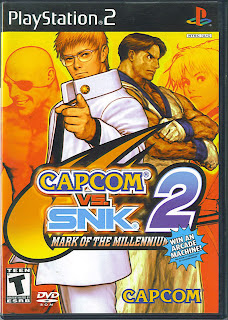 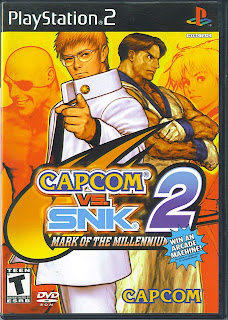 If you're a fan of 2D fighting games CVS2 is a gift from the gods! More over if you're from the Street Fighter or King of Fighters fandome now you can put some muscle behind your claims of superiority over the other. CVS2 has an impressive collection of fighters, 44 in total! 21 Capcom characters from Street Fighter, Rival Schools and Dark Stalkers. Most of the Street Fighter cast are ported sprites from the Alpha series, Yun/Yang is from Street Fighter III and M. Bison gets a much needed face lift from his "cubby" alpha series sprite to look more like the original SFII M. Bison. CVS2 also brings back Eagle from SFI.
Before playing this game I never played any KoF games but the SNK roster had some unique characters, Hibiki is clearly inspired by the anime Blood. Haohmaru is a curious fighter as her pet hawk also attacks and acts as an arial projectile. Mai is SNK's equivalent to Chun Li and she was more than just eye candy. Athena was from a NES title I had back in the day and Ultra Rugal has to be as cheap/difficult as Shin Akuma from SFA2.
CVS2 has as many features as characters. Arcade mode has 3 options, your traditional 1p vs comp, 3 vs 3, and ratio where you distribute a set amount of points towards a team of 3 or less.
Survival Mode has: traditional survival and infinity survival. Training Mode. Replay Mode...see my fight below against CJ (Ken). Color Edit Mode...want to give Chun Li that orange outfit? now you can. Groove Edit Mode to tweak the different grooves (more on that later) and Versus Mode.
Grooves replace SFA3's ISMs C-groove is your basic alpha super meter with 3 levels, A-groove is the equivalent of SFA's custom combo P-groove is the equivalent of SSFIIT super meter.
The graphics seem a bit rough around the edges and could use some serious anti-alizing. The controls feel right, if a bit forgiving compared to the controls for SFIII.
The character map selection is lacking considering there are 44 characters I'd be happy with 22 different locations, CVS2 has about 12. I wanted to choke the in game announcer, his voice was as annoying as a hokey radio DJ's, but I guess it fits the whole World Warrior Network WWN.
Other little issues of mine are Sagat's Tiger shot is identical to Ryu & Kens Hadoken, that's just lazy programming.
Overall there's enough variety to keep fighting game enthusiasts occupied for a long time.
8/10

Posted by XxSITHappensxX at 4:22 PM No comments: