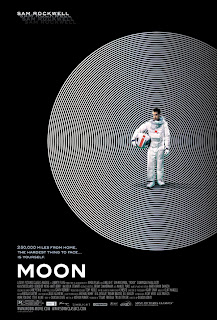 Basic Plot Summary:
Place: The moon. Time: A future not long from now (2030-ish I think). Sam Bell, astronaut, is working on a lunar base of some sort. He is the only person on the entire base, only assisted by an all-knowing robot called GERTY (voiced by Kevin Spacey). He has been stationed on the base for almost 3 years, his contract nearing an end, and with his flight back to earth scheduled only 14 days away, he can't wait to get back home to see his wife and daughter again. However, suddenly one of the automated moon-vehicles (harvesting rock-samples or whatever) goes awry, and he goes outside of the base to investigate it... but then something unexpected happens, and he has to change his perspective on everything.


There are no aliens, lasers/phasers, wormholes, warp engines or jump drives here, just a lonely space age concierge, an unflappable monotone robot, and a whole lot of fodder for your brain to chow down on.
This is what science fiction was meant to be. In short, this is one of the best sci-fi movies I have seen in a LONG time.

Posted by XxSITHappensxX at 8:46 PM