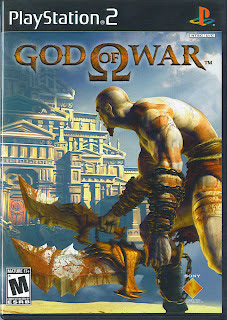 What do you get when you put your VHS tape of Clash of the Titans and CastleVania in the blender and hit puree? You get served God of War! This action/adventure game looks promising the game engine looks inspired by Konomi's Vamp slayer in Rygars realm of Greek Mythos. God of War is like a great book, you find yourself unable to put the controller down because you want to find out what happens next. The story of Kratos plays out like a Tarantino film, the begining is the end is the begining. Speaking of Kratos, he one bad ass MFer! He'd give Snake a run for his money in the "coolest game character" catagory. The games starts off mercilessly with Kratos battling the minions of Ares in the Agean Sea, and the first boss fight seals the deal that this is no CastleVania clone! The game employs a fighting engine similar to Parappa the Rappa & DDR get the sequence/timing correct and you'll pull off some impressive kills. Kratos can acquire new attacks for the Blades of Chaos by collecting blood orbs which are obtained by killing monsters, breaking objects such as pottery and statues, and opening chests. And speaking of chests (ATTENTION PARENTS), GoW is the first game I've played where there is totally topless, women in bed together plain as day. This is not some "hot coffee" secret, it is at the beginning of the second chapter and if you want to get some "expirience" hop in bed with the ladies and give em some hot Spartan luvin.... After the story unfolds a little and you realize Kratos' motivation the game becomes even more enjoyable, the action never lets up but story is what drives this title from an average action platformer to an exceptional addition to your library, it doesn't hurt either that the main character is one badass anti hero. The graphics are above par and the level design is fantastic, some areas trully help redefine the typical platformer and the sense of scope reaches new hights literaly and figuratively. One instance that comes to mind is while scaling a wall on the Temple of Pandora you'll spot the Titan Cronus, you'll suddenly realize just how high up you are. God of War also has an air of exploration that is reminiscent of Tomb Raider that can payoff, and the puzzles in the game actually seem intelligent and serve a purpose. I just completed one last night that had me sacrafice an innocent man trapped in a cage, ever see Temple of Doom? Flame On indeed!God of War also has a fantastic soundtrack that adds to the drama within the game and makes the whole experience more cinematic. If you have a decent home theater this game will sound incredible.
9/10
Posted by XxSITHappensxX at 10:27 AM