Movie Review: The Man with the Iron Fists 2 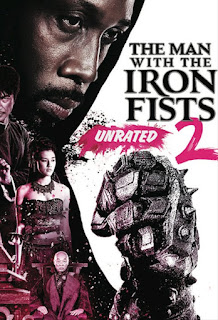 The first movie was enjoyable I think it helped tremendously that the first movie had such a great cast, Russel Crow, Dave Bautista, Jamie Chung, Rick Yune, and Lucy Liu.
Iron Fists 2....not so much, and I'm being nice!
So at the end of the first movie Thaddeus whooped Brass Body's ass but at the beginning of IF2 Thaddeus is on a quest for inner peace and is on a journey to the Wu Chi Temple but gets jumped by some punks from the Lion Clan and loses. Da Fuq?!
Thaddeus your power was over 9000 last time we saw you now you wanna be a vagabond like Jubei Yagyu????
So we leave Thaddeus drifting down the river and pick up our story in Tsai Fu village where the men of the village work like slaves in the nearby silver mines for Master Ho and his Beetle clan in exchange for protection from the evil spirit of Lord Pi.
A long time ago Lord Pi tried to steal the Golden Nectar (I know....I know) from the monks at the Wu Chi temple. Take a guess where Thaddeus washes up?
Master Ho is actually a very apropos name considering he's collected all the young ladies of Tsai Fu and made himself quite a harem.
There isn't anything spectacular about the beetle clan compared to the characters seen in IF1, Even Master Ho and his beetle gang are nothing more than pawns for the real phantom menace...
And then there's the daughter of Li Kung, the man who resuscitates Thaddeus......her name.......is.......Innocence.....................

The Man with the Iron Fists 2 is a straight to video release and it's glaringly obvious why, I saw it on Netflix....it's not worth paying to see....the two fight scenes aren't even that great, the story is uninspired, the acting is dialed in and some of the dialog is on par with AotC.
D+

Posted by XxSITHappensxX at 6:06 PM

Email ThisBlogThis!Share to TwitterShare to FacebookShare to Pinterest
Labels: Movies, The Man with the Iron Fists 2