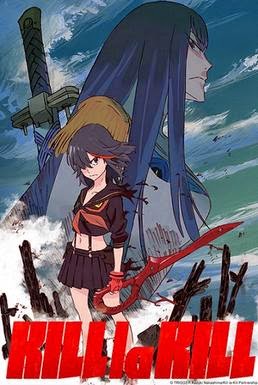 This is one of the more bizarre anime series I've ever seen, but it was also refreshingly unique!
Where do I begin??? Kill la Kill is an insanely ULTRA Hyper paced Mega powered battle royale between Ryuko Matoi and Satsuki Kiryuin leader of the Student Counsel and heir to the at Honnouji Academy and her elite 4 student counsel leaders.
Armed with a scissor blade...literally half of a giant scissor Ryuko travels to Honnouji Academy to find the person who killed her father and avenge him.
This series starts off in 4th gear and just gets crazier and crazier, After her initial run in and defeat with the boxing club president, Takaharu Fukuroda and his 2 star Goku uniform she is introduced to Senketsu a sentient Sailor Fuku that drinks Ryuko's blood and in turn grants her super human abilities and when Ryuko and Senketsu sync Senketsu transforms into.....well here see for yourself!

Kill la Kill is not for the feint hearted but the show never takes itself seriously and that is how I made it through the wierdest 24 episodes I've ever seen....seriously, it makes Shin Chan and FLCL seem normal!
Three quarters of the way thru the show, just when the show has hit a crescendo of perversion, nudity and over dramatic violence it switches gears and offers one of the most hilariously outlandish theories on human evolution ever! Ya know the saying clothes make the man......


Anyway we are treated to a twist even M Night Shamayalan would be proud of! Satsuki reveals her plan of defeating her mother, Ragyo, and the REVOKS's Company thus freeing humanity from the COVERS, the aliens who are responsible for human evolution!
Like I said Kill la Kill is absolutely 1000% insane but it's insanity is refreshing and funny at times and if you choose to watch this please wear some pants!
Posted by XxSITHappensxX at 1:54 PM