Can't See the Forest Through the Trees

It's been 3 months time since I was on FFXI. The last thing I remember Vana Diel was in full holiday mode and Krog and I were partying hard in SanD'Oria. At first I was a bit disoriented, forgot the button config and had to remember what the last thing I was working on. After a few minutes I refamiliarized myself and finished a simple little quest I was working on back in December....handing out flyers for the magic shop in Port San d' Oria, runninng errands for Tenshodo in the warehouse, collecting Lufet salt, and getting some guys guilt glasses back for him. After a few hours I felt it was time to start focusing on leveling Tryp again so I saddled up and headed on out to Jeuno. My path took me thu the Jugnar forest which is teeming with all types of wildlife from tigers, beetles, pugils and the ever pesky orc. 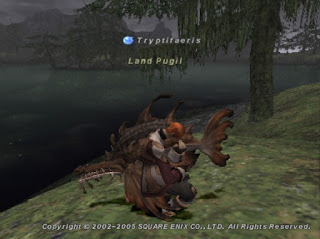 At the far end of the forest I noticed a Bastokan flag guard which meant my country was in control of the region. I decided to dismount my ride and I set my HP (home point) there, I've made this mistake so many times in the past.....I wonder when I'll learn to be steadfast and make it all the way to my destination. Well I ended up killing a few beetles and sneaking around the forest to avoid the more menacing creatures but with only 30 XP per kill I was wasting my time but without a Chocobo to give me safe passage to Jeuno the next area was even tougher. After dieing once in the forest and dropping down a level to 23 I mustered all my courage and set out on foot, across Batillia Downs to Jeuno. I was almost to the Gates of Jeuno when a recieved a request to join a party on Qufim island, I jumped on the opportunity and ran thru the metropolis of Jeuno to the lowest level, thru the dank cave that runs under the Bastore Sea to the Island of Qufim and and navigated thru the barren wasteland to Delfucts Tower. 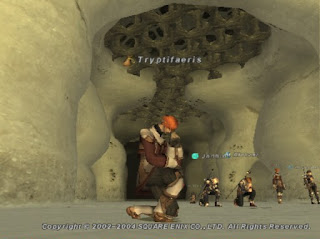 After reaquiring level 24 and making it to level 25 BLM in about 2 hours time, the party went it's separate ways and I made my way back to Port Jeuno to the airship that would shuttle me to the tropical Paradise of Kazham.
Posted by XxSITHappensxX at 11:54 AM