This week’s missions can net you 1300FM. Subtract the cost of the second Shade Crossover costume and the Crossover BGM if you haven't gotten it yet and the Fortune Tix fight and you'll end up with -2700FM


After completing the weekly missions, head over to the eXtra Battle Mode, this week we have:

1. Get your hands on Fortune Tix against Sagat #4 for 250FM participation fee

2. [Quick and Immovable] Get the Crossover Costume #4 for Sagat (Shade from Cyberbots: Fullmetal Madness) for 2500FM participation fee.

3. Get the Crossover BGM! Helion Theme from Cyberbots: Fullmetal Madness for 1000FM


I've pretty much given up on Fighting Chance and the stupid Fortune tix thing, it's a FM sink in a FM recession! Oh and coming June 25th we're getting a "new" stage! The SF II CE Ryu Stage, Suzaku Castle at Night.... 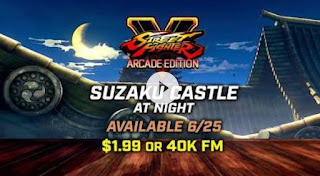 Soooo I have some questions (the same ones as everyone else)
1. Why?
2. If I bought the Suzaku Castle stage do you expect me to drop either 2 bucks or 40K FM for a reskinned stage?
3. What FM do you think we have? I've been a miser with my FM so I could afford it via FM but again, why should I have to pay for a reskinned Stage?


As always, keep fighting the good fight till the end. Be smart with your FM and don’t complain about the XBM golden soldiers and "Shin" versions of characters because the alternative is Capcom charging REAL MONEY for all DLC characters.
Posted by XxSITHappensxX at 10:38 AM