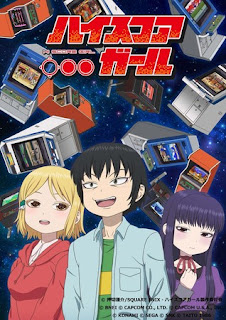 The 80's gave me two of my favorite things from Japan Super Dimensional Fortress Macross And Street Fighter, And High Score Girl takes aspects of these two things and manages to make one amazing story!
The story revolves around Haruo Yaguchi and the 90's arcade and gaming culture, notably the fledgling FGC and Street Fighter II. The story begins with Haruo in 6th grade who is caught up in the 2nd arcade renaissance when SFII hit arcades. During one of his visits to the local arcade Haruo, who mains Guile, meets his match against a Geif player who turns out to be Ono Akira a quiet girl from his class. Haruo finds a true rival in Ono but through his fiery spirit to surpass her he begins to learn more about Akira and a relationship begins that Haruo is completely aloof to.
Meanwhile another girl Hidaka Koharu who went to the same elementary school as Haruo finds his laid back, yolo lifestyle fascinating and harbors her feelings for him. Haruo, again completely oblivious to her feelings only sees her as a means to an end when her father puts a Street Fighter II Dash arcade cabinet in front of his store. Hidaka quietly watches Haruo play, simply enjoying spending time with him, in time Haruo introduces Hidaka to his "realm" and discovers she has dormant potential in fighting games.
High Score Girl is a love letter to those of us who grew up during the 90's arcade rebirth and the 4th - 5th console generations. There is so much for me to relish in this show with all the gaming nostalgia! And the triangle between ono, Haruo and Hidaka brings me back to my youth watching Hikaru, Minmay and Misa Hiyase in SDFM.
My one and only complaint is the art style, yes it's faithful to the manga source material, but it is (IMO) just slightly better than Shin Chan from Cartoon Network.
High Score Girl launched on Netflix last December and I meant to check it out sooner but RL lately has really impeded on my time to watch all the shows I want to.
I'm very excited to watch Season 2 when it launches later this year!!

Posted by XxSITHappensxX at 2:34 PM