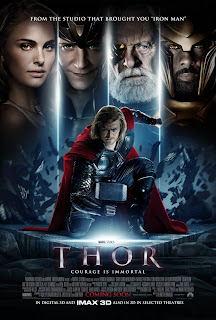 Obviously little Brad Anderson never saw this version of Thor...
Take it back Brad.Take back what you said about Thor! If you don't take it back,I'll tell Chris about all those love poems you wrote about her...
At the end Of Iron Man 2 we got a sneak peak of Agent Coulson in New Mexico at the site where's Thors hammer, the Mjolnir, is found By S.H.I.E.L.D.
Chris Hemsworth stars as Thor the God of Thunder, son of Odin played by Anthony Hopkins. The movie begins with a detailed history of the war between Asgard and the realm of the Ice Giants.
The prelude concludes with Odin and his two sons Thor and Loki (Tom Hiddleston) as kids promising to defend Asgard from the threat of the Ice Giants. This scene was as transparent as they get, Thor with his flowing blonde hair like mommy and daddy and then Loki with his black hair and frailer physique completely reminded me of Mufasa and Scar! What red headed jew doesn't realize they're adopted?!
Fast forward to the present Thor is about to ascend the throne as the new king while Loki looks on from the side lines.....who didn't see this coming!? Suddenly Asgard is infiltrated by Ice Giants trying to reclaim the Ice cube of power but they get wiped out by the steel golem everyone  saw in the commercials.
So Thor rounds up his posse of Asgardians and goes to the realm of ice giants to lay the smack down on them. Shit starts getting serious when Thor's ol man shows up and wisks them back across the rainbow road to Asgard, back home Odin rips Thor a new one and banishes him to New Mexico...thank God he didn't get banished to Jersey!


My main issue with this movie is, where is the villian threatening mankind in this movie? Is it Loki? Does Loki show any interest in the realm of Humans throughout the film? No, not really. Is it the Frost Giants? Maybe but we have global warming on our side. Basically Thor gets a time out on Earth for bad behavior by his daddy, get's hit by a car, tazed, sedated, hit by a car again meets a chick, gets pissed when he can't reclaim his weapon the Mjolnir then kinda accepts his banishment until his friends from Asgard arrive.
With most Super Hero films the hero is a regular person who changes somehow and uses their new found power to protect humanity from a villain. In Thor the biggest threat to humanity seemed to be a secret government agency stealing scientists research.
I loved Natalie Portman in Black Swan, but for me, Jane Foster, seemed off...I can't put my finger on it because she is a fantastic actress, but she just didn't come across as a believable astrophysicist.
Stellen Skarsgard as Erik Selvig, Jane Fosters senior member of the science team seemed odd but I rolled with it, I enjoyed the scenes he shared with Hemsworth especially the bar scene seeing Thor and a mortal tossing back boilermakers!
I'm not familiar with Chris Hemsworth but he was perfect as Thor in my opinion! I'm glad it didn't go to a well known Hollywood actor such as Brad Pitt or Daniel Craig...not that they're bad actors....not at all but I think having a lesser known actor play this role helped tremendously.
The battle in Jotunhiem was very impressive as was the special effects used to bring Asgard to life. I was also very impressed by wardrobe's in Thor, especially the one's for the Asgardian's!
And my personal favorite was Heimdall played by Idris Elba! The wardrobe and make up was extremely cool! The role might've been small but Idris really owned the part and made Heimdall come across as one badass muthaf*ckin' gate keeper on the rainbow road!
And what the hell's up with the rainbow road anyway! I want to see a Super Mario Kart  edit to the scene where Thor's bustin up the rainbow road on You Tube asap!


Thor felt more like a good fantasy movie than a Marvel super hero movie to me, and unlike Iron Man it didn't feel like an origins movie either. I enjoyed Thor and can confirm he is no homo in this movie, but I wouldn't spend the money to buy it when it releases on Blu Ray & DVD. I am looking forward to seeing how Thor gets back to Earth in the Avengers next year.