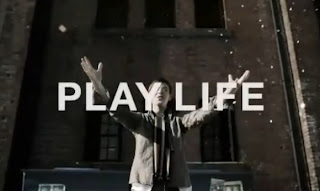 I've never owned a portable gaming system but the PSP was one I would've probably dropped the cash on...it was a sweet looking device! But there was always something that stayed my hand from pulling out the wallet...one analog stick! Then the PSPgo was revealed and again one analog stick...WTF. The games were gorgeous, it played movies and had PS store integration....nice, but I never did get one. Now Sony reveals the NGP (PSP2)...Just watching the commercial I'm happy to see Sony has listened to the community and added the second analog stick, a touch screen, motion control and some sorta touch pad on the flip side. The PSP2 looks slightly more ergonogically comfortable than it's forefather. All in all the PSP2 looks fantastic and did you see some of the franchises the PSP2 was running? Uncharted, Resistance...those games are graphics monsters!
Looks like next holiday season Sony is gonna face off against the Nintendo's 3DS, I hope the PSP2 competes better against Nintendo's next handheld than the PSP did.

Posted by XxSITHappensxX at 6:48 PM