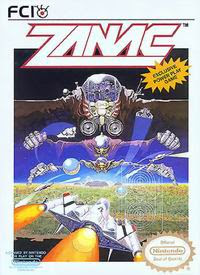 Occasionally I wax nostalgic with my years of playing video games, and for some odd reason this game came to mind the other night. It was released on the NES way back in 1987! And from what I remember it was one tough mother, in fact I don't think I ever beat it! I made it to the 12th and final level but the "system" was too difficult for a skilled pilot like my self to defeat.
Back then stories were much less developed and this one was no exception and the localization was so poor it reduced the need for a story to just above pointless. The basic gist was;

a long time ago, an unknown alien race created a tiny device known as
the System containing boundless wisdom and knowledge, but also vast destructive
potential. If properly opened it would grant access to untold wisdom and
technology, but if improperly accessed it would unleash almost unlimited
destruction. Mankind attempted to access the System and failed, and the System
began to spread out from the tiny Icon that contained it. Spreading throughout
known space conquering and destroying all in sight, it posed a mortal danger to
all life. Mankind discovered how to properly access the knowledge and technology
within the System, but could not shut its destructive expansion down because of
its vast tactical systems.
The System threatens to engulf the entire galaxy
and destroy all life. However, the defenses of the System are designed around
destroying and overcoming entire fleets. In theory a lone star fighter may be low
enough priority to the defenses of the System to allow it to fight its way into
the heart of the System and destroy it. AFX-6502 "Zanac", the most advanced
star fighter ever produced, is launched on a desperate mission to fight its way
to the heart of the System and shut it down forever.
The game difficulty is directly attributed to it's enemy A.I which rivals some of today's games. It was actually very simple, there were eight different power ups;
Depending on what power up you had and how much you used it the System would counter your powerups with increased enemies to the point where the screen was inundated with enemy ships and shots. By level 10 the basic enemy attacks would have you seeking power ups like a crack addict...but most of the time it would worsen your situation. Zanac was probably the hardest scrolling shooter I ever played.
Scoring these old games is gonna be tough considering some of these titles are over 20 years old.
But from what I remember it was challenging with decent sound effects, not much story and poor localization. If I were comparing it to games of it's time like Dragon Spirit or Ajax (vertical scrolling shooters) I'd say it was average but with a challenging A.I.
5/10

Posted by XxSITHappensxX at 2:49 PM