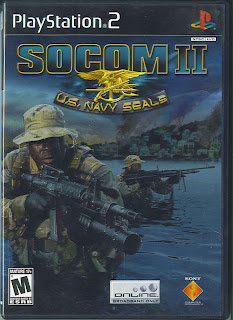 Some times a quality game sneaks by you, this was the case for me with SOCOM. I forget what game I was all wrapped up with when SOCOM was released but thankfully my friend CJ picked it up, when I came over to check it out I didn’t know what to expect….after playing just once was hooked! This game has single handedly lead the PS2 online gaming revolution.Zipper Interactive’s little G.I. Joe simulator has taken online console gaming to a new level, very few games have spawned such a fervent following which can been seen all over! Do a google search for SOCOM clans and you’ll have at least 10 pages to sift through. SOCOM II took all the great aspects of the first game, gave them a makeover, then read the suggestions/criticizims from us (the ones who “made” zipper a top tier publisher) and went to work. The result…..a worthy sequel to great game. The online levels truly show that Zipper Inc. listened to what we said and that they have a great deal of pride in their flag ship title. Each new level is jaw dropping in the sheer scope of detail and vastness. For example Enowapi (a breach level) has the Seals trekking thru a swamp, across some of the most lush landscapes with an abundance of plant-life. These new levels are simply amazing, and Zipper has added nice little touches like the ambient sounds of various wildlife, tall brass blowing in the wind, the thundering of a waterfall, and the sound fades and grows as you move further away OR if someone or something moves in front of you! All these additional effects truly add to the overall “covert ops experience” and in effect transforms the style of game-play away from run and gun to a more tactical one. Aside from the aesthetic upgrades, there are also new additions to the Seal/Tango weapons cache such as the infamous PMN mines (the gift that keeps on giving), shotguns (do I hear birds chirping), rocket launchers, and few new assault riffles. It also seems that Zipper has tweaked the guns to reflect their real life counterparts more realistically and now offer optional attachments such as therm-optics and the M203 grenade launcher. Zipper has also given players more incentive to play off line by rewarding good players with additional goodies to use online, just like SSX3. Other worthy additions to the online game are the friends lists, which allow you to find your buds easily, this is a great feature more online games have adopted.....unfortunately not all your requests make it to the intended person. Personalized taunts....nice little extra feature....funny if not abused.S2 also has assigned clan tags which show in orange, the new clan system gives more power to the clan, but only the leader has the ability to "clan" someone. The new clan system is another way to find the people you play with on a regular basis, which is very useful when trying to find 1-8 people out of the average 15,000 a night in the North American Universe! As great as this game sounds I'm actually a bit disapointed. There are problems in this game that we never had problems with in S1, like the mics! I can't figure why we're having problems with this since they worked fine in SOCOM1. The only thing I can think of is perhaps some security firewall is affecting the mic functions. At first I thought it was affecting only people utilizing routers....Then we have the abundance of glitches poping up each day like invisible players, disapearing hostages, super speedy players, etc.Another headache is the frequency of times I've been booted.....twice as many times as S1. Last but not least is the ranking system for this game. Just when you think you've unraveled the mystery of the ranking system a new aspect enters the equation! Overall the game is great, but I feel it could've benefitted from a few more weeks of beta testing.
online: 7/10 Offline 9/10
Posted by XxSITHappensxX at 5:52 PM