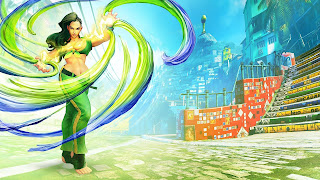 After yesterday's lackluster reveal Famitsu decided to troll Ono San by beating him to the Dragon Punch....Ha ha see what I did there? They let the cat out of the bag and revealed the 3rd brand new fighter to the franchise days ahead of the planned reveal at the Brazil Games Show!

Ooopsie!!
We'll still need to wait for the trailer but here's Laura!
She looks like a capoeira practitioner, I think her design is great, she definitely looks like a Character that fits in the Street Fighter Universe. The bangles are a nice nod to the other capoeira fighter in the franchise, Elena. I like her gi and the half corn rolls are cool!

The 16 Character Core Roster has been updated courtesy of Capcom Unity member NeoPyroXx, So with Laura's early reveal planned for BGS I still believe Capcom will announce another character to coincide with NYCC which takes place the same dates as BGS 10/8 -10/11. It would definitely be an perfect opportunity to announce Alex's return or Tom's first appearance..... 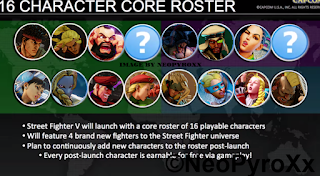 Posted by XxSITHappensxX at 8:56 PM