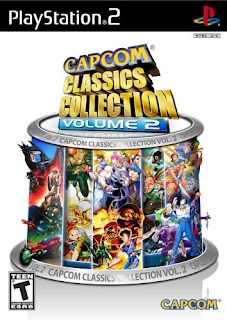 Cacom Classics Volume 2 has plenty for the retro gamer to enjoy but there was really only 1 game in the collection that made this a must have for my collection....Street Fighter! Yep the 1989 fighting game that paved the way for one of the most recognizable gaming franchises around the world. My collection is now complete, I actually played the original Street Fighter in the arcade and since I never owned a Turbo Grafx 16 I didn't get to play Fighting Street back then.
Capcom Classics Collection V2 has many other fantastic titles for your retro gaming cravings!
1941
Avengers
Black Tiger
Captain Commando
King of the Dragons
Knights of the Round
Magic Sword
Quiz & Dragons
Sidearms
Street Fighter
Strider
Super Street Fighter II Turbo
Tiger Road
Varth: Operation Thunderstorm

I actually got my wife to play the Quiz & Dragons game and she enjoyed it, Strider is another fantastic title that I remember being big in the arcades. I also remember Krogenar and I played Captain Commando in the arcade back in the day.
Avengers is an interesting title as it was directed by Takashi Nishiyama who later co planned the original Street Fighter which was inspired by Yie Ar Kung Fu. The game allows you to play as either Ryu or Ko.....interesting! The game has 3 attacks Punch, Kick and Roundhouse which is a 360 degree attack (coughtatsumakisempukyakucough).
7/10
Posted by XxSITHappensxX at 1:45 PM 2 comments: It's gonna be hard to write a review for this game, so I'll let my FFXI blog speak for itself.