Have you ever said to yourself "if I could go back and do it again..."
That's essentially what this game is all about.
Life is Strange is a game that revolves around a girl (Max Caulfield) who returns to her childhood home town of Blackwell because she gets accepted to the prestigious Blackwell Academy for photography. But even in this beautiful little fishing town in Oregon there is some seriously bad mojo going on here!
Life is Strange  can best be described as a digital interactive TV series clearly inspired by shows like Twin Peaks.
I don't mean that in a negative way at all, this game is extremely good and once you get into it you'll find it hard to stop until you reach the end of the final chapter!
The game opens to Max in Mr Jefferson's photography class where she has a vision of an enormous hurricane destroying the town while Mr Jefferson is lecturing the class.

The first chapter "Chrysalis" introduces us to the characters of Blackwell Academy, you meet Max's childhood BFF Chloe Price, and a bunch of other students at Blackwell like Nathan Prescott the rich kid who believes he's untouchable, Kate Marsh a girl who's fallen victim to bullying due to a viral video from a Vortex Club Party, Victoria Chase the obnoxious rich girl that is the epitome of the mean girl stereotype with her mean girl minions, then there's the jocks like Hayden Jones,  and the geeks like Brooke and Warren.
By the conclusion of the first Chapter Max discovers her power to rewind time, is reunited with her childhood BFF and we learn how Chloe's life has taken a dramatic turn since her father died in a car accident, and we begin Max and Chloe's trip to discover what happened to Rachel Amber a student at Blackwell that's been missing for 6 months.
This game is Rated M for some very good reasons, this game is not for kids,,,not for blood and gore, but for much more realistic subjects, bullying, suicide, child abuse, drug abuse, school violence, kidnapping, rape, murder, death and how to cope with it along with a slice of socio-economic differences and how they affect people......heavy stuff folks!
Life is Strange came out as episodic DLC starting  in January 2015, this gem flew right under my radar but fortunately I was able to grab a physical copy of the game and experience this trip back in time to when I was in high school....so glad that chapter of my life is in the past. In retrospect it's absolutely hilarious how utterly pointless all the stupid drama was at that point in my life!
Anyway if you want to play a game that's more mature and emotionally engaging than so many games out right now check out Life is Strange!
8/10

Posted by XxSITHappensxX at 11:06 AM No comments:

Happy Valentines Day from Mario, Princess Peach, Toad and the crew at 150cc's!

Can love bloom on the race track?
Let's see.....
It'sa me aMario

Posted by XxSITHappensxX at 6:22 AM No comments: 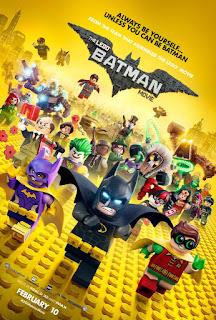 I took my son to see the Lego Batman movie and as I suspected it was absolutely hilarious! We were laughing so hard, obviously he didn't get all the jokes but he does have the 1967 Batman Movie starring Adam West so he did catch the Bat anti shark repellent. It's unfortunate to say but I enjoyed this movie infinitely more than BVS, even with all the comedy there was a message in the film, but wisely didn't derail the fun of the movie.
The ad campaign for this movie was brilliant and sold this film!

The music was another key ingredient that added to our enjoyment of The Lego Batman Movie!


And yes the Condiment King is an actual villain in the Batman universe...I Googled it Joker ;)
There's gonna be a lot of serious sci fi and Super Hero movies this year The Lego Batman movie was a refreshing change of pace compared to the overbearing DCU. What better way to celebrate Presidents Day weekend than for Batfans young and old to see The Lego Batman Movie!
I wish I was in the theater Robert Downey Jr. was in if he went to see this!

Posted by XxSITHappensxX at 10:12 AM No comments:

Email ThisBlogThis!Share to TwitterShare to FacebookShare to Pinterest
Labels: The Lego Batman Movie 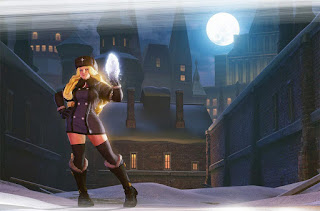 Capcom just released the Season 2 Second DLC Character Reveal Trailer for.....Kolin.
I like the Lupe Fiasco song they have with the trailer, someone needs to remix Kolin's trailer with Vanilla Ice's song....yeah he only had one.
Anyway it seems as if Kolin has lost her baby face from the season 1 cinematic story, but thankfully they didn't ruin her face, in fact the more mature face is more suited for her.
So Kolin's martial arts style is systema with the element of ice. I hope Kolin get her own stage like what her trailer opens with.I'm not sure if this is a case of good video editing or not but at mark 1:03 it looks like Kolin might have a variant of Cammy's Ultra II CQC from Street Fighter IV.
Kolin V trigger, "Diamond Dust" is intriguing in that it also freezes the stun gauge and if you do stun the character with it the opponent get frozen in place on the ground!
Kolin will be available February 28th along with her Story/Battle/ Nostalgia costumes.
I guess the Underground Arena will be Kolin's official Stage so does that male Ring of Destiny Geif and Mika's stage? 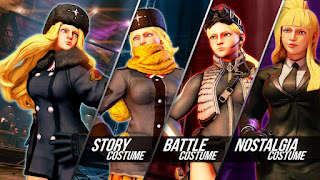 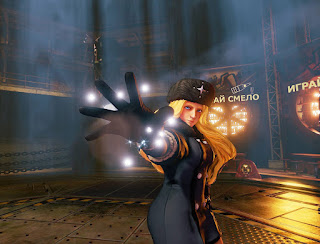 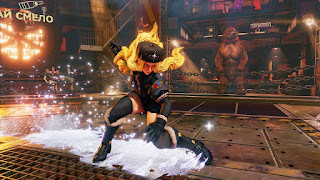 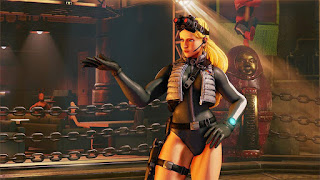 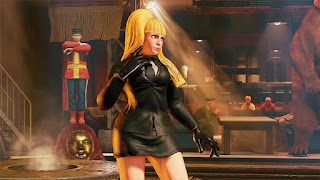 Posted by XxSITHappensxX at 11:51 AM No comments: