Google's 360-degree Monster Short is the Future of Movies.

Our first live action story takes place in the middle of downtown Los Angeles, where a meteor shower has left a deep scar on the streets of Chinatown. Panic, fear and an alien sends a young woman scrambling to escape. Directed by Justin Lin.

Google has finally posted the full video of its epic 360-degree short monster movie Help on YouTube. Directed by Justin Lin (Fast and Furious, Star Trek Beyond), the nearly five-minute immersive film puts viewers on the streets of Los Angeles just as an alien creature crash lands in the middle of the city.

The film is short, but doesn't skimp on major movie style cinematic special effects and editing, delivering a peek at what big virtual reality movies may look like in the near future. This is Google's first live-action film in its Spotlight Stories series, which focuses on delivering immersive stories via mobile.

To experience the 360 perspectives of the film, you can watch it on YouTube or use the Spotlight Stories app on Android or iOS.

OK I've been anxiously awaiting this trailer, I'm pretty shocked it came out today....completely unexpected! I was betting it would be attached to CA: CW.
Nevertheless it's here and all I can say is THIS IS THE STAR WARS MOVIE I'VE BEEN LOOKING FOR!!!
Now I'm not your average Joe movie goer, I know the chronology of Star Wars and know when Rogue One takes place chronologically, but I'm pretty certain the average person is gonna see this trailer and be completely confused. They'll be scratching there heads wondering where Rey, Finn, Kylo and the rest of TFA cast is.
They'll figure it out...
December can't come soon enough! I wonder if they're going to show Vader in the Official Trailer...I think they may need to.

Posted by XxSITHappensxX at 8:25 AM No comments: 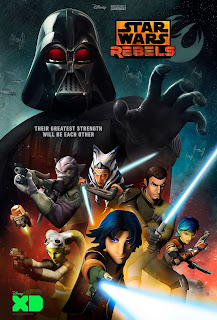 What a phenomenal episode! The eriness of Malachor was portrayed so well with the Sith temple hidden beneath a layer of ice in a enormous crater. Rebels does an excellent job of designing planets that pay homage to Ralph McQuarie and his art work! The area surrounding the Sith Temple was frightening with all the charred bodies, it totally reminded me of that famous playground scene in Terminator 2. As predicted Ezra was separated from Kanaan and Ahsoka and thats when he meets the Old Master! 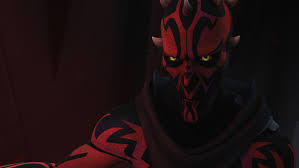 I loved how Ezra's initial meeting with Maul complimented Luke's initial meeting with Yoda on Dagobah! Which is interesting because I was quite unhappy how the TFA was so littered with homages to the OT. Maul played the feeble old hermit (cane and all) stuck on Malachor to young Ezra but when the inquisitors arrived he shed his feeble facade and demonstrated he was more than just a shadow... clearly a nod to the 2001 novel by Michael Reaves, Darth Maul Shadow Hunter.
I LOVE this character and I know I'm not alone and I know LFL now realize the mistake they made by "killing" him off in TPM.


As Ezra and Maul traverse the temple to retrieve the Sith Holocron, Maul ever so non nonchalantly shares little gems of knowledge to the naive boy from Lothol, which in actuality is the Sith's code. As I predicted Maul is planting the seeds of doubt in Ezra's mind, and it's apparent Ezra is much too impatient and is already on the same path Anakin was at the same age.
The dialog between Ahsoka,  Kanan and Maul was hilarious as the're scaling the Sith Temple, like on the elevator platform... Maul to Kanan..."ohhh sorry only 2, no more no less"...
Kanan pulls Maul off the platform and goes on with his padawan, "Ahsoka you're with gramps"
Then later while Ahsoka is fighting Maul and she tries to run to Ezra, "Running away.....again Lady Tano?"
And this brings us to the crescendo of the Season Finale Darth Vader arrives on Malachor!
Now I'm fully aware this confrontation has many similarities to Luke Vs Vader in RotJ and I may come across as a hypocrite with my frustrations with TFA but this scene was absolutely incredible and I got the feels when you hear the Anakin/Vader voice overlay calling to Ahsoka. OMG! 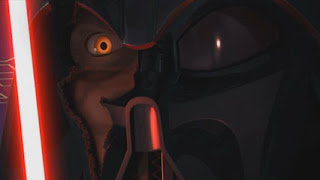 Now I understand my level of enjoyment for this scene is due in some part to watching The Clone Wars Series and seeing Anakin and his Padawan grow together.
I mentioned before the similarities with RotJ this scene had, also just as Return of the Jedi has multiple meanings, Twilight of the Apprentice does as well! Are we talking about Ahsoka? Ezra? or even Maul? or all of them!


Just like watching The Talking Dead after TWD I love watching Rebels Recon right after SWR and I cannot wait to hear what Dave Filoni was hinting at regarding a major announcement at Celebration 2016 in London in 103 days!
I hope it's what myself and many others think....a certain Grand Admiral who happens to be a connoisseur of fine art!
Posted by XxSITHappensxX at 5:47 PM No comments: