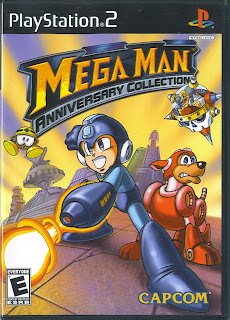 Remember the good ol' days of 8 bit side scrollers, where all ya needed was a square controller with a D-pad and 2 buttons. Where you didn't need a keyboard, a headset, a broadband connection (which didn't even exist then anyway). It was just you verses the hordes of pallet swapped baddies and the evil bosses! Well someone at Capcom does, and thanks to thier fondness for this extinct 2-D genre we will get to play one of gamings historic characters Megaman in his first 8 titles! The blue bombers one of those characters who've stood the test of time like Mario and his brother......what's his name , Sonic, the Belmont clan, and Link. So if you're a younger video gamer who doesn't remember the glory days you should definately check out this game! You'll get to kick Dr. Wily's mad scientist but 8X for less that the current 3-D super platformer-MMORPG-fighting bonanza.....and you may have more fun too! If I were to rate this game on it's visuals it would probably recieve below a 5 but fortunately for Rocks sake I'm not. What you don't know who Rock is? Well in Japan Megaman is called Rockman (think stone not music) The basic idea is Rockman is created by doctor light to stop Dr Wily's mad robots from destroying earth! Each of Wily's robots has a special attack that causes extra damage compared to MM's peashooter, with this knowledge you must figure out which weapon to use against which Boss....think ROCK, paper, scissors. Although very outdated the music fits Megamans world perfectly and it's nice to see the slight improvements from MM1-MM8 in sound and visuals. This is simply a fun compliation when you want to delve into a quality classic game with simple gameplay and a decent challenge. 10 Megaman games + loads of goodies like art work, videos for $29.99!
7/10
Posted by XxSITHappensxX at 6:02 PM No comments: 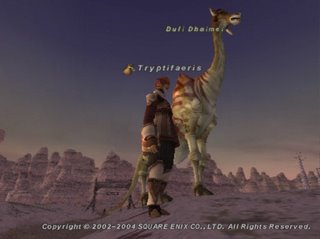 I've been trying to complete as many Bastok quests as possible. I just acquired the Dangruf stone fairly easily. And I got the painting of a windmill in Konschat for Roh Latteh. I tried to give some NPC in Bastok Markets cinnamon sticks, but he won't take em yet. I reached level 10 in fishing so I headed to Windurst the other day to take the test. While enroute to Muhuara I went fishing on the deck of the ferry, caught a few fish anda few monsters, but nothing I couldn't handle. I reach Muhuara and head out to the Buribura plains, I check a Bull Dhamel and to my surprise it registers as a decent challenge So I transform into white mage tank mode, cast bind on the giraff-like beast then cast Bio, Slow, Diaga, Water, and Wind....oh and I cast Blaze Spikes on myself so everytime it hits me physically FLAME ON baby! 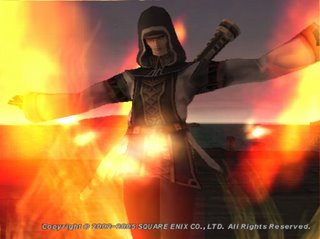 It was surprisingly easy to defeat. So now I'm 3/4's of the way across the plains and I decide to collect a couple Bull Dhamel skulls , same game plan but this time a couple pesky Goblins decide to jump in the fight......not good /em finds death.
So now I'm back in Selbina, I should've just logged off at this point but noooo I had to redeem my pride by killing stuff in front of lowbies outside the Selbina gate, I kill a few sheep and a few Damselfly's, next thing I know I find my self double teamed by Damselfly's with my MP running low. But I refuse to turn tail and run, I notice I've been poisoned but the second fly is close to death so I hang in there, the Damselfly dies and I run to the gates of Selbina watching my 12 HP slowly dwindle, I reach the zone and collapse from the poison /em finds death again. I didn't have enough MP to cure myself. So I'm currently hanging out in Selbina, waiting for a sand storm so I can get some Valkrum sun sand and then I'll run back to Bastok and complete one more quest.Then I will set out for Windurst once again, this time I will avoid the temptation to kill and get to where I'm going.
Posted by XxSITHappensxX at 3:59 PM No comments: 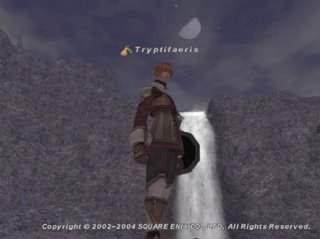 Once again I contacted Krogenar the Beastmaster and asked if he would like to go to some dark, dangerous place called 'Drachenfall' - it's a waterfall that we can only get to by running a gauntlet through the Dangruf Wadi, it's a labyrinth with thick mist and hot geysers. The whole place is infested with goblins and lizards. After a few wrong turns we find the hidden entrance that leads back into Gustaberg, as we re-enter Gustaberg we find ourselves at the bottom of a narrow ravine, high above is the bridge I have crossed many times on the way to the Konschat Highlands. The waterfall reforms into a river with a path on each side, two bridges cross over it. Patrolling each side are Pugils' and Goblins. We make our way fowards, Krog uses his BST abilities and charms the Pugils and sets them against the Goblins blocking our path. Meanwhile, I rested up my MP so I could keep Krog's HP from "going red". It was slow going but the strategy worked, we get to the base of the famed waterfall. We fill our canteens with the water, and head back to Bastok. Another quest under our belts. 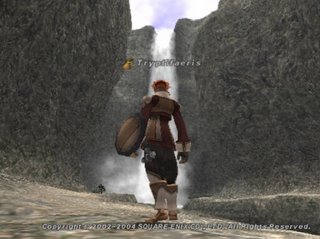 Posted by XxSITHappensxX at 4:52 PM No comments:

Once you start down the dark path... 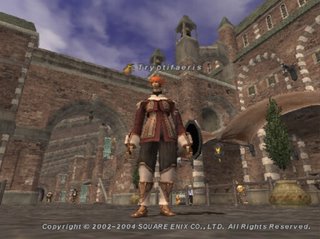 Since last we saw our fearless elvaan mage Tryptifaeris has spent a good 5-10 real life hours just fishing, starting off I broke many many willow rods and have lost countless amounts of bait but slowly I gained experience .01 points at a time. After reaching level 10 fishing skill I traveled from Bastok back to Windurst where the fishing guild is located and accepted my first "test", I needed to catch a specific fresh water fish, a moat carp, and bring it to the guildmaster in Port Windurst. I am now a new recruit fisherman ^^.
Once I reached level 20 Krogenar volunteered to help me reach Jeuno, as a WHM I would most like fail miserably going solo. Once there I made my way to Upper Jeuno and met Brutus who was less than pleasant to me or his chocobo's. 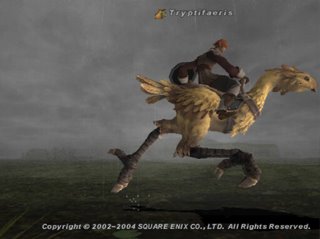 Along with fishing and acquiring my chocobo license I have sucessfully acquired the 3 items necessary to complete the sub-job quest (Crab Apron, Danselfly Worm, and Magic Skull). With my White Mage at level 21, I traded the 3 items to the NPC in Selbina, and headed back to Bastok to set my white mage as my sub-job and black mage as my main job. It was like I was starting new.....I went from riding Chocobo's and fighting in parties on the Valkurm Dunes where most creatures were incredibly tough, back to battling worms and bees right outside the walls of Bastok.

It was around this time that Square Enix updated all the servers for Summer fest, at night all the cities of Vana Diel celebrated with fireworks throughout the night, and the moogles came to towns to offer adventurers special quests to aquire rare items. 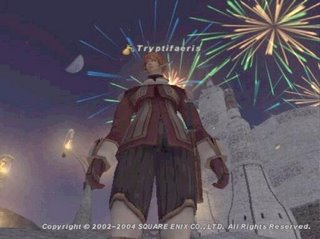 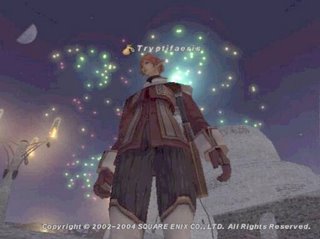 Meanwhile I was running around outside Bastok blowing up bees, worms, and unsuspecting goblins. As I began leveling up my black mage my white mage spells started to become available to me again, at level 4 black mage I reaquired my level 2 white mage spells, at level 8 black mage I regained my level 4 white mage spells.
After a few days of intense XPing I reached level 16 black mage/level 8 white mage and am partying in the dunes once again trying to reach level 17, once I reach level 17 I will be able to purchase the coveted black mage spell Warp, which will allow me to.....warp from where ever I may be to my home point. So that's what Tryptifaeris has been up to these last few weeks, I'll check back in once I reach level 30 with my white mage! That's when things are gonna get really interesting Until then Kweeeeeeh!
Posted by XxSITHappensxX at 10:38 AM No comments: