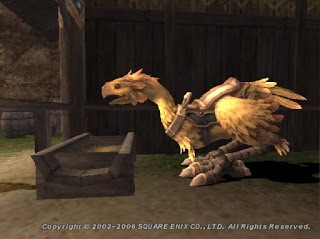 Last night I logged on to check on Yellow XIII, the Bastokan VCS told me he took Yellow out for walk in town and Yellow seemed interested in everything. A few days before he lost a race to some cocky NPC's (cut scene onry) and was anxious to try again, so I fed him some gyshal greens and told the Bastok VCS that Yellow wanted to compete against the NPC's again. This time Yellow won! Afterwards I took Yellow for a short walk outside Bastok and read him a story.
The next day I checked on Yellow XIII, he was scheduled to exercise in a group with other chocobos for 2 days, apparently he over did it and he's sick and starving now. I fed Yellow 3 bunches of gyshal Greens and 2 tokopeko grass bushels so he was full but was still ill. I told him the "Happy Chocobo" story I got from those rude NPC breeders after beating their chocobo 3/4 times. And I took him for a short walk out to Zegham Hill, but it didn't help. Before I left the stables I changed Yellow's care plan to rest for the next 24 hours, then listen to music the following 24.
Posted by XxSITHappensxX at 10:48 PM No comments: 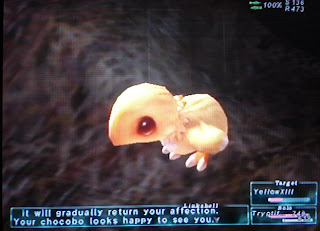 I completed the story that precedes the chocobo raising process and recieved my chocobo egg. Once I finished that I headed to the chocobo stables in Bastok and handed in my egg to the Vana’diel Chocobo Society (VCS) chocobo trainer. The process of raising my chocobo from egg, to chick, to adolescent, to adult will take approximately one month (Earth time). My wife has volunteered to oversee the nursery of our baby chocobo. She will be working with a VCS chocobo trainer to care for our chocobo. The attributes of a fully grown chocobo will depend on the treatment it receives during this time. I'm confident chocobo care services will be knocking on my mog house before the month is up. 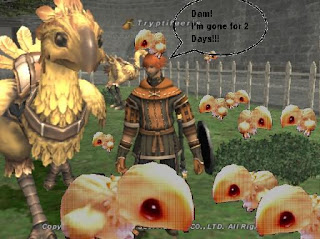 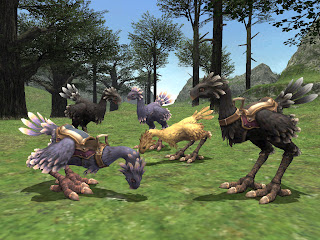 Posted by XxSITHappensxX at 5:28 AM No comments: