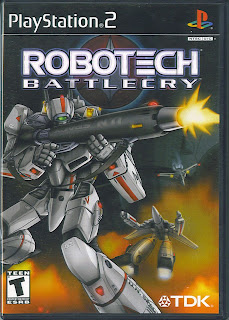 Change or die.
Robotech Battlecry will have fans of the HG anime feeling a bit nostalgic. I'll admit I bought this title simply because I grew up watching the show and the idea of piloting a veritech, fighting the Zentradi was exciting. The games cell shading art style seemed appropriate and was relatively fresh, only a handful of other games, including Sly Cooper used it.
I soon realized my nostalgic feelings were misplaced, what held true for the anime held true here as well. Robotech is not Macross, the story of Macross is what I really enjoyed....and later when I learned about the "reimagining" of Macross by HG I learned there was a major difference.
There is a lead character, Jack Archer and his wing man Izzy Randal. Battlecry also has the occasional cameo by Minmay, Lisa or Roy, which is nice fan service. The game is broken down into 5 chapters each with plenty of missions, the first chapter is straight from H.G. Macross with the missions named after the episodes of the show, "Booby Trap", "Countdown", "Bursting Point", and "Force of Arms". After that though Battlecry goes off on it's own timeline which takes place at the same time as Space War I.
There was more than just flying around in a Valkyrie (veritech) that made the show such a cult classic, there was the human element of love, loss, music that brought emotion.
Robotech Battlecry kinda skims the surface as far as that's concerned and puts most of it's focus on a flight sim that allows the player to "transform" into 3 modes while escorting, scouting or defending members of the RDF all while blowing up Zentradi. Each configuration of the veritech offers unique advantages/disadvantages over the other and each are almost specific to the type of mission you're on. The developers, Vicious Cycle, did a commendable job with the Veritech animations, and the overall look and feel is true to the series. The game does suffer from the feeling of repetitiveness but yet it offers plenty of reply value to collect all the RDF metals which unlock maps in two player, different paint schemes, armored veritech and cast interviews. The cast interviews are pathetic compared to the extras on games such as Lunar Silver Star Story Complete. It feels like a total afterthought, there's one with Rebecca Forstadt (voice of HG Minmay) where she's sitting in a patio chair in the back of some building and you have to struggle to hear her over the passing public bus! AWFUL!!! Another thing that the game really needed was a controllable camera, some missions really suffered from not being able to move the camera, it becomes very annoying being shot at from a blind spot and having to change to a more maneuverable mode to manipulate the camera so you can find the enemy shooting at you. The story itself isn't very gripping either, nor was the main antagonists Gorian, Skardde and Zeraal.
And your reward for beating the final boss and finishing the game.....I won't tell ya but it's gotta be a first in video game history. I understand what they were trying to do, but I don't think it worked and was totally anti climatic.
I think only fans that grew up with Robotech will stick with this title till the end...
5/10
Posted by XxSITHappensxX at 11:13 AM No comments: