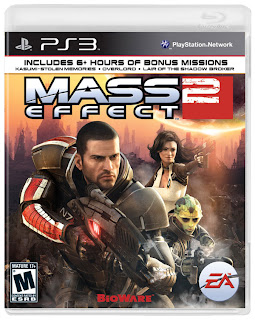 After all the critical acclaim this game had received prior to it's release on the PS3 I had to get it! This industry at times tends to over hype the shit out of games where we the gamers have such lofty expectations there's no way in hell the game can live up to them....this is a case where all the hype and praise is not only justified my very high expectations were met and exceeded!
Since the original Mass Effect is exclusive to the XBox 360 I'm coming into this series without the benefit of knowing the characters, their motivations and relationships to each other, the galaxy and it's history and mythos.
So for the PS3 version Bioware added an interactive digital comic that covers the events of the first game with all the crucial story arc's included.
As I stated above this game totally blew me away! The galaxy is enormous and exploring every planet in every system offers a wealth of data the brings even the most minuet details to light and really brings a whole other level of immersion to the galaxy which begs to be explored!
The multitude of locales you'll visit are spectacular and each one is completely unique and breathtaking, from Aratoht to Omega. Each is distinctive and memorable just like the characters in Mass Effect 2.
Commander Shepard: ME trilogy main character/Commander of the Normandy SR2/last best hope for the 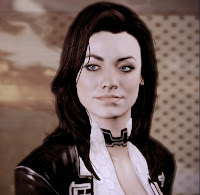 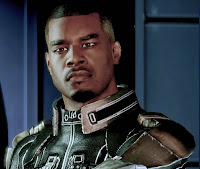 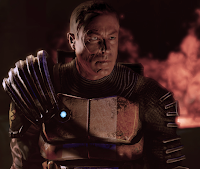 Mordin Solus: A Salarian geneticist, worked on the Genophage project, closest thing the ME series has to Spock 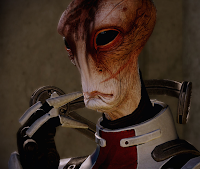 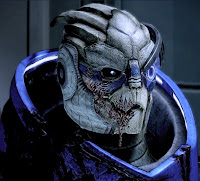 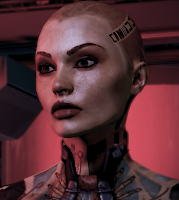 Grunt: A genetically engineered Krogan Soldier, one pissed off toad! 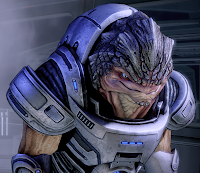 Legion: A Geth mobile platform that seems free from the Geth collective..coughborgcough 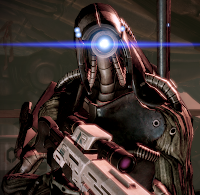 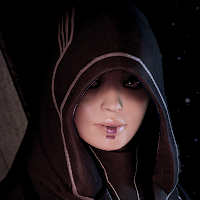 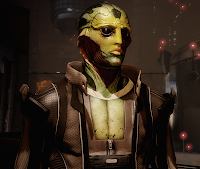 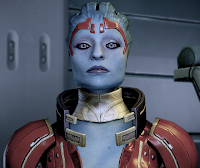 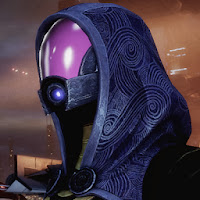 So the Illusive man resurrects Shepard to stop the threat of the collectors but whats his ulterior motives? Shepard is tasked with "collecting" the most bad ass team throughout the galaxy to go on a suicide mission to  infiltrate the the Collector base on the other side of the Omega 4 relay.
In order to complete your mission you must recruit the above 12 characters AND gain their loyalty which is easier said than done, you'll need to navigate the murky waters of interracial diplomacy as well as the occasional cat fight...while you're out flying from one side of the galaxy to the other trying to save it you are also trying to get laid! My Shepard got Miranda and her genetically perfect ass in the commanders bed!
I've played my fair share of RPG's and non even come close to the replay-ability of this game!
Aside from the morality choices that you make during conversations which determine if Shepard will go down the path of a Paragon (hero) or Renegade (ass hole) you also can choose from six different classes to play as:
Adept: Strong biotic abilities such as Charge, Pull, Shockwave and Warp
Engineer: Strong tech abilities such as AI Hacking, Combat Drone, and Overload
Infiltrator: A mix of Tech abilities and Ammo specialist such as Disruptor ammo and Tactical Cloak
Sentinel: A mix of Biotics and Tech such as Tech Armor and Throw
Soldier: A mix of Combat Abilities and Ammo specialist....duh
Vangard: A mix of Ammo specialist and Biotics such as Incendiary ammo and Charge

So much variety and freedom to play your way with multiple endings depending on the desicions you make, the relations you make, the depth you decide to go exploring the milky way and an ending that rivals Hollywood blockbusters like Independence Day!
This game is a MUST EXPERIENCE for any and all gamers! 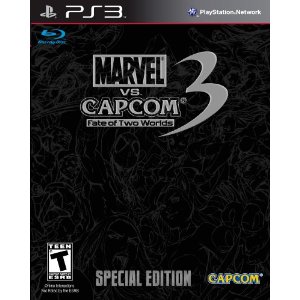 I picked up my SE copy of MVC3:FTW on February 17th, so I've had the game since launch and have only logged about twenty or so hours of play time on it...I've been so wrapped up with the awesomeness of Super Street Fighter IV!
So to begin this review I have to start by saying I have been a die hard fan of Capcom's Street Fighter Franchise since I played the original Street Fighter at Adventure's arcade in Cross County shopping Center in Yonkers. When I got older and Street Fighter II hit arcades I was playing at Nathans on Central Ave in Yonkers. When MVC came out I gave it a chance but just didn't enjoy it as much as Street Fighter, I gave MVC2 a try when I saw it in the arcade's mainly because seeing Megaman in a fighting game roused my curiosity...but alas I still preferred my good ol Street Fighter franchise.
So when I saw the first teaser for MVC3 last year I'll be the first to admit I was already on the Fighting Game Resurrection band wagon with Street Fighter IV and after seeing the teaser for MVC3 I was hyped, so hyped I actually pre ordered the special edition!
Graphically MVC is stunning, the intro alone is epic, the cast albeit smaller than MVC2 is pretty good, the character models are all gorgeous, the movement is extremely fluid and the 3D models really look incredible in the game.
Marvel's roster includes: Captain America, Dead Pool, Doctor Doom, Dormammu, Hulk, Ironman, Magneto, M.O.D.O.K., Jean Grey/Pheonix, Sentinel, She Hulk, Shuma Gorath, Spiderman, Storm, Super Skrull, Taskmaster, Thor, Wolverine and X-23.
Capcom's roster includes: Akuma, Albert Wesker, Amaterasu, Arthur, Chris Redfield, Chun Li, Chrimson Viper, Dante, Felicia, Hsien Ko, Jill Valentine, Mike Haggar, Morrigan, Nathan Spencer, Ryu, Trish, Tron Bonne, Viewtiful Joe and Zero.


As I mentioned earlier I prefer the game play style of Street Fighter versus the MVC series, I would never attempt to play this game as seriously as I do Street Fighter as such I cannot comment on the quality of the online network or notwork from what I've heard from a few friends from Capcom Unity...you'll have to judge that individually for yourself.
As far as the online features MVC pales in comparison to SSFIV, which begs the question why?
One of the most controversial aspects for me and many veterans of fighting games is MVC3's inclusion of "simple mode" which gives kids today that refuse to invest the time to actually learn (*shudders) combo's and the basic gameplay do's and don'ts. I understand that fighting games have a very faithful...yet aging fanbase and that for the genre to survive and thrive new blood needs to be brought in....and spilt. The problem is everyone expects to be top tier with little effort and that may work for FPS like CoD but fighting games online are much MUCH fiercer and less forgiving which is a HUGE turn off to todays generation of gamers (waves to all the rage quitters and lag switchers out there). So to end my mini rant I'm absolutely against dummying down fighting game's to appease joe-gamer but I understand why Capcom did it.
MVC 3 FTW is a fun, frenetic fighter with jaw dropping graphics, solid gameplay with a decent sized roster that offers near endless replay value.
8/10