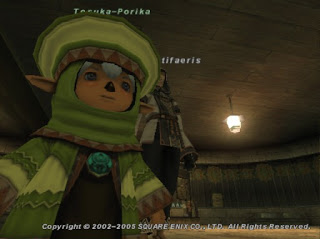 After defeating the NM Galgalim that Uran Mafran summoned I returned to Windurst and obtained Cabuncle's Tear, I returned to Koru Moru who asked me to bring him 4 Astragalos, after getting Koru Moru his astragalos Ildy Goldy arrives and reports on the events with Uran Mafran. Somehow Uran Mafran has cast a spell over his old classmates that erased himself from their memories! Koru Moru asks me to find the rest of the class and see if they remember Uran Mafran.
My first stop was to the Auastery to speak with Fuepepe, then over to the Optistery to see Frakku-Nurakku, then Proffesor Shantoto. The professor tells me I need to find Sunny Pabonny but he left for San D'Oria, when I reach San D'Oria I meet up with Gulmama and he gives me an Ice Pedulum and tells me to go to Fei Yin. 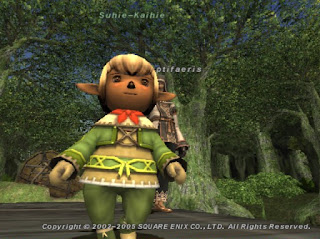 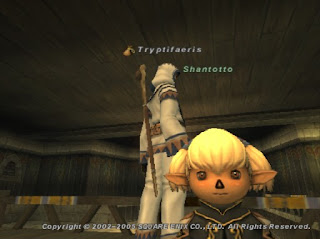 I traveled to Fei Yin with Darcy, Krogenar and a few other members of LotB to get the whisper of frost from Shiva Prime at the cloister of frost and the second peice of Artifact Equipment. We gathered at the protocrystal and I traded the ice pendulum to the crystal and we entered the Cloister of Frost. Sunny Pabonny shows up and warns us not to follow him, he has a strolling sapling pet follow him into the protocrystal, when we follow him in we see Uran Mafran turn his pet sapling into 6 Dryads and sic'd them on Sunny Pabonny. We obliterated the record for best time on that NM battle, I think we were done in less than a minute. Once we finished the AF battle we traveled thru Fei Yin back to the protocrystal, Darcy, Cabanaboy and I defeated Shiva Prime. Afterwards I headed back to Koru Moru to report and collect my Evokers Spats!
On the following Saturday Vrtra and I traveled to the Cloister of Storms and defeated Ramuh Prime for the whisper of storms. Sunday Vrtra and I headed to the Cloister of Tides, not an easy place to get to! I tele'd to Yhoator Jungle, then hiked to the Temple of Uggalepih, navigated the Temple to The Den of Rancor. This is by far the most difficult Cloister to reach as we had to defeat a temple gardian and then use the paintbrush of souls to get thru the secret entrance to the Den of Rancor, once in the Den we had to find a drop down to the lowest level and hope sneak and invis didn't drop as we did. The battle against Leviathan was slow with Vrtra wailing away at it as I kept barwatera and haste up. Leviathan retaliated by casting Spring water to recover around 600 HP multiple times and slow. I had reraise up and decided not to run down the path when we got Leviathan down to 50%, when he used his 2hr ability, Tidal Wave I got hosed so to speak but thanks to reraise I was back in the game. Here is where I made our fatal mistake, I used a ginger cookie and ran down the path a bit too far to keep Vrtra's barwatera up. When it dropped I sarted to run back but suddenly his HP dropped to 0, then the big fella came for me. So I still need the whisper of tides, the hardest cloister to reach and the one most people don't have the fame to get the tuning fork.
Posted by XxSITHappensxX at 11:16 PM No comments: