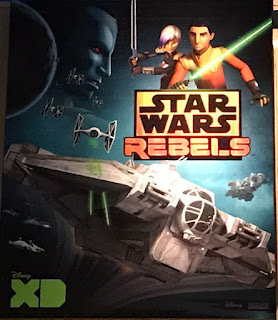 As Kanan tells Ezra in this episode "all paths are coming together" which is clearly evident when the Ghost arrives on Yavin IV and Zeb and Callus greet them. Shortly afterwards Hera "crashes" the reunion.
I really enjoyed these two episodes, not so much for the story that took place in it,which was good, but rather for how these two episode add to the connective threads between the PT, R1 and the OT!
I'm not clear where R1 falls in the BBY timeline, but if I were to guess 1 or 0 BBY so these episodes in season 4 are probably 2/3 BBY so as we get nearer to December my attention is becoming more and more intense to see if any of these characters in SWR cause ripples that will affect events in the ST (most notably Thrawn).
I also really appreciate the way the politics are being handled in recent years compared to george's heavy handed approach in the PT. A great example is the scene between Saw and Mon Mothma at the beginning of this episode there is a clear divide in this fledgling rebellion of how to fight the Empire. And there are arguments for and against both Gerrera's and Mothma's stances. And seeing young Ezra torn between both is a great representation of young adults in RL that find themselves "undecided" on real world politics and politicians!
The second episode was very enjoyable also because it felt a little like a noir mystery. We all know what the Empire's "super weapon" is, the fun is seeing how Saw is the ONLY one in the Rebellion who is on the right track to uncovering the truth. Unfortunately his methods have alienated him as extremist and thus the Rebellion doesn't learn about project Stardust until there's only the most minuscule bit of Hope left.

Posted by XxSITHappensxX at 10:38 AM No comments:

Season 4 kicked off here in the States yesterday, I enjoyed it. Gonna try and stay as spoiler free as possible....
I found Ezra’s antics just slightly less annoying than Jar Jar.
The sexual tension between Kanan and Hera is over 9000!!!
Gar Saxon’s brother said Palpatine....I don’t think the Emperors name has been mentioned in this series yet, they’ve said “the Emperor” but not Palpatine.
Nice to see Thrawn is still very much a part of the battle with the Rebels.
So what is Vader been up to since his battle against Ashoka???
The Dutchess totally reminded me of a Zentradi battle pod!
Can you imagine if the Empire had macronized Sabines weapon for the Death Star!?! So much for a trench run...
The highlight for me was seeing the return of Bo Katan! Kudo’s To the voice actor, she nailed Bo Katans somber attitude! And I love that she has accepted the Dark Sabre!!!
Dear Dave and Pablo more Bo Katan Please!
Posted by XxSITHappensxX at 9:28 PM No comments: 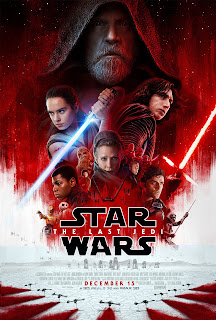 Initial feelings after 2 views so far
Porgs are the new Ewoks.
Luke is scared of Rey???
Snoke isn't talking to Kylo
Gorilla Walkers....meh
Where’s Lando!
Is Chewie using ancient Bothan pearl cream? he looks younger than in TFA!
Wow Rey still has both appendages!
Oh Kylo you’re not gonna do it.
I’ll try spinning, that’s a good trick.
Snoke and the amazing technicolor bathrobe!
I still don’t care about Phasma, Poe or Finn.....
The trailer is cleverly spliced to make it look like Rey is talking to Kylo at the end....she's not. Although a Rey and Kylo double team would be fresh! Always two there are....
If the rumors are true about Snoke, he is Disney / LFL doorway to the Old Republic and I think we're gonna see Luke, Rey and Kylo work together to defeat Snoke.

Posted by XxSITHappensxX at 10:27 PM No comments: