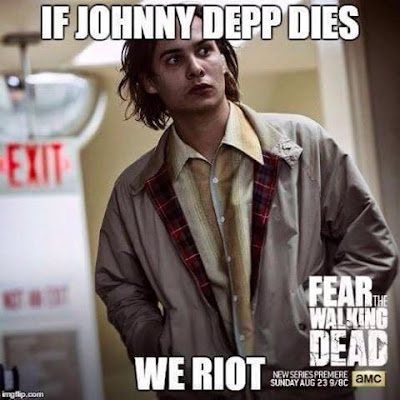 Well that was ultimately under whelming and unsatisfying. I'm surprised FTWD got picked up for a second season, the show suffered from a multitude of problems in my opinion, a cast of uninteresting characters that didn't offer a reason to give a shit about them, Travis Manawa, a High School English Lit teacher who is divorced now with a new woman (who happens to be a guidance counselor at the same school).Madison Clark, a single mother of two teenagers Alicia and Nick, the latter a lying,conniving drug addict that has the same moral compass as Golum (he'll last while).Travis's own son hates him and Alicia and Nick have no respect for him.

Then there's Travis's ex wife Liza she's busting her ass to raise Chris and put her self thru nursing school...ooh we have a character that has a medical background maybe we'll get some info on the virus!
Nope!
How about Chris Manawa??? Why do I care about him? Unlike puddin lovin' Carl I really couldn't find a reason to care for Christopher.
And then there's Nick's sister Alicia....she's smart, attractive and seems genuinely normal. Alicia is totally drama free and seems to be handling the end of days rather well.
Then there's the barber of El Salvador, Daniel Salazar he's about the only character I thought could survive in the real Walking Dead show, interestingly enough he seemed like the polar opposite of Hershel, a nice old man who loves his family...he lets Travis stay in his shop similarly to how Hershel let Rick and company stay on his farm.
For me the show finally showed some promise in episode 5 where we meet the most interesting man in FTWD...Strand the well maintained gentleman who shared a cage with one of Travis's neighbors....remember the overweight one Travis was sent in to talk to? I loved how Strand ever so calmly deconstructed the poor guy who was on the verge to begin with and then bartered to save Nick when they were about to take him away by giving the Colonel his cuff links. What he said to Nick afterwards felt so prophetic considering the hellhole we know the world is going to become, almost as if he knew it was going to happen! 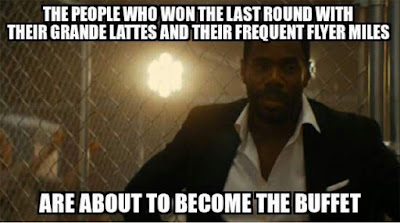 And I know when he suggested heading west instead of east into the desert my friend Krogenar's interest piqued... And when he let Nick look thru the telescope out to sea I could hear Krogenar jumping up and down yelling triumphantly at the TV...congrats Krogenar....but Strands plan is going to fail, I don't know how but I suspect Kirkman is gonna sink Strands plans....
Aside from the weak characters another problem was we all know where the show is headed and the trama and drama that Travis and his "family" faced felt insignificant compared to the fucked up shit Rick and his "family" has gone thru.
The one thing I was really hoping FTWD was going to bring that TWD hasn't touched upon much since S1 was some hints about the virus! The opportunity was certainly there with Liza and Dr. Exner, but alas nothing...quite disappointing.
So after this six episode run I really can't honestly say there's anything that's gonna make me want to watch Season 2 of FTWD.

Posted by XxSITHappensxX at 9:59 AM