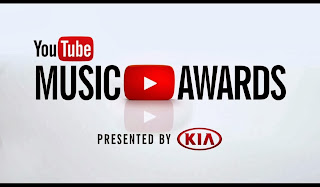 I remember cutting school to watch the first day of MTV...yeah I'm THAT old. Well MTV has as much to do with music as Trevor Philips has with the Nobel Peace Prize.
This is exciting, I hope MTV watches this and remembers what they used to be about. Or not I don't really care.

Join us now as as the final countdown to the first-ever YouTube Music Awards continues. Up next: YouTube Music Awards live at 6 p.m. EST from Pier 36 in New York City, featuring performances by Lady Gaga, Eminem, Arcade Fire, and more. Hosted by actor and musician Jason Schwartzman and comedian and musician Reggie Watts. Presented by Kia.YouTube Music Awards is all about you—the fans—and the artists and videos you love. The nominees were selected based purely on YouTube data from the last 12 months, and every time you watched, shared, liked, or subscribed, you helped determine the final list.

Posted by XxSITHappensxX at 5:53 PM