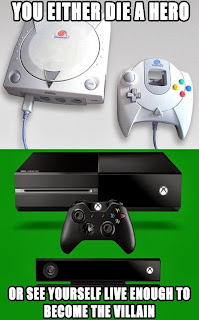 So E3 has come and gone and I did enjoy watching Microsoft's epic fail and 180. I enjoyed  watching Sony jump on the hater aide bandwagon, those two totally remind me of the good ol day of Nintendo and Sega....but E3 also left me a little uncertain about the industries future.
Part of me wishes we could return to a more innocent time in gaming where a hedgehog  had beef with 2 Italian plumbers, and you're biggest headache with your games was having to blow the dust off em before popping them into the console.....games that still work today! Days before on disk & day 1 DLC, days before having to worry about your banking info being stolen because the console's maker's servers have been hacked, days before politicians blamed every shooting on video games....oh wait never mind that one.
Don't get me wrong, there are some truly remarkable things we gamers have today that was just not possible back then....games like The Last of Us, Red Dead Redemption, Halo, God of War, and services like YouTube, Netflix, Hulu+. Digital movies, music, TV shows available to download...there's so much these consoles offer  on top of just playing video games! But then we see large corporations like Microsoft pull some deceitful shenanigans like we saw at E3 this year that make me wish gaming's founding fathers, Atari, SEGA and Nintendo would rise up, and give the gamers a reason to tell companies like Microsoft to STFU.
If you thing the applause Sony got at E3 was big, imagine if SEGA dropped this bombshell!
I can only speak for myself but if Sega did do this I would have thrown my money at them! And I think many others would have also, just to show Sony and Microsoft the ONLY reason they are where they are IS because of US!
SEGA please come back to consoles!

Posted by XxSITHappensxX at 1:44 PM