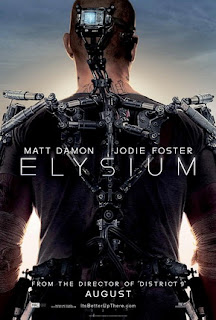 Sony Pictures released the first trailer for Neill Blomkamp's new sci film Elysium....
So in about 141 years from now the 1% will live in an orbital space station with the most power cutting edge tech and medical advances available to them......so where do the rest of us live? On the sphincter muscle of our solar system.... planet earth!
I love the concept because much like Gattaca this sci fi movie is litterally on the horizon of reality! You have to be blind if you don't see it on a daily basis, the middle class is being slowly being pushed to one side of the 1%/99% line.
Adolf Hitler tried to create the Arian race....a superior race by forced genderfication, nowadays it just happens, the filthy rich live in their gated homes in their gated communities they have their rich friends over and all belong to the same country club, they are sent to the same universities as their parents, meet the same type of people, get jobs because of who they know or related to, they marry the same type of people and plan they're pregnancies so they're kids can grow up together and continue the cycle.
</rant end>
I loved District 9, it was original and did a phenomenal job with a very small budget, and based on this trailer I think Neill Blomkamp has another great sci fi film in store for us this August.