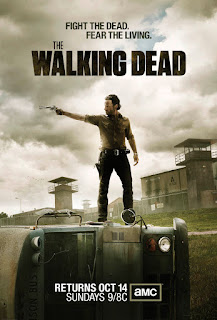 Good episode, nothing crazy. I like the juxtaposition between Woodbury and the Prison! The residents of  Woodbury have become  prisoners and Ricks group come and go freely from the prison! Daryl obviously was gonna go with his douche bag brother Merle but that I foresee will lead to sibling rivalry and Merle getting caught between The Governor and Bat shit crazy Rick. There's gonna be an interesting dynamic between Daryl, Rick, Meryl and the Governor before the end of the season for sure.
I understand why Glenn acted the way he did when Meryl showed up but it seemed a little out of character, there is some definite tension between him and Maggie but nothing a little sexual healing  can't fix.
Now to the highlight of the episode Lori's apparition! I found it interesting how Rick's breakdown was perceived by Tyreese and his group, to them he is telling them they don't belong there but in reality Rick is yelling at Lori's apparition...that scene gave my wife and I shivers!
and here is a sneak peak at S3 E10 Home, seems like Daryl is no longer gonna follow in big brother footsteps blindly. In my opinion of all the character we've met so far Daryl is best suited to survive the Zombie Apocalypse, Rick is buckling under the many pressures on his shoulders....

Posted by XxSITHappensxX at 10:25 AM