High School of the Dead 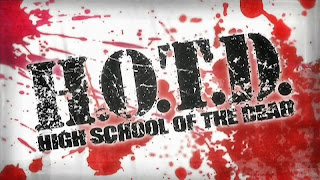 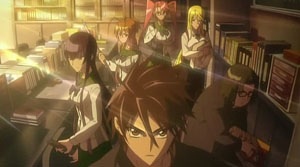 The main character is Takashi the typical emo high school student who broke up with Rei, who's now dating Hisashi, Takashi's friend....uhh oh! Then there's Saya the spoiled daughter of a wealthy Japanese family and Kohta the quiet geeky character with an unhealthy obsession with guns and finally there's Saeko (pronounced psycho), she's the president of the high school Kendo club...she reminds me of The Walking Dead's Michonne mixed with Saya from Blood+.
HotD is definately for a mature audience, the blood and gore is in your face no holds barred as is the T&A. 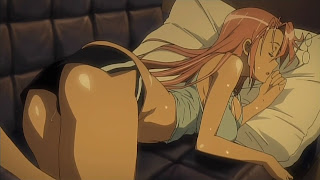 This is not a show you'll find even on adult swim!
The best way to describe how you'll feel after watching HotD....is the way you felt after watching Sucker Punch...You found yourself disgusted by Blue and the High Roller who enjoyed babydolls "dance" then realize you enjoyed the fantasy world that Babydoll retreated to in her mind to escape the horrors of the asylum and you yourself feel "icky"
Oh and then theres that creepy teacher Mr Shido.....that scene on the buss was disturbing!
HotD was a fun Anime, with mature themes dealing with subjects like rape, murder death, sex and pandemics....definately 18+

Posted by XxSITHappensxX at 7:00 PM

Email ThisBlogThis!Share to TwitterShare to FacebookShare to Pinterest
Labels: Anime, High School of the Dead, Zombies