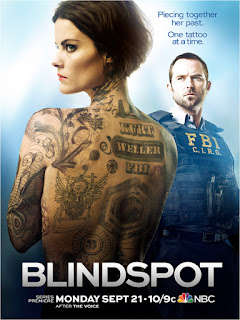 After reading the TV Guide fall preview for this show I added it to my DVR....it sounded interesting and they labeled it as an "editors choice"
A person who's memory has been completely erased on purpose, they discover they have extensive skills with weapons and CQC......sound familiar?
Open your mind....
After watching the premiere of Blind Spot I felt like Jane Doe could be Douglas Quaid's Sister.
I was not blown away by this show like Kurt Weller should have been in the subway scene...that was ridiculous! I'll reduce the size of the explosion by breaking up the C-4 putty....
And who realized to was so easy to disconnect subway cars!

Then there was Jane insisting on going with FBI agent Wellers to help "solve a potential crime",
In the real world the answer would be a resounding no fuckin way, and that's what Wellers tells her....every freaking time! But she keeps saying "I have to go, to help me figure out who I am", and he either changes his mind or hits a brick wall where Jane is the only person who can help him...like talking to the Chinese roommate of the suspect.....really?! With out Jane the FBI would've been lost....

Then Weller agrees to let Jane go to Ellis Island to stop the perp from blowing up Lady Liberty with C-4....good thing because he got his ass beat by a disgruntled man with a switchblade.Jane shows up in the nick of time to save highly trained FBI agent Wellers! He gives a complete stranger permission to shoot Chao (that's the "bad guy") with his side arm while Chao holds a blade to Wellers neck! REALLY!?
After watching this I could practically see Agents Mulder, Scully and Dunham facepalming in unison.
I'm all for strong female leads but I think Lady Sif (Jaimie Alexander) is better than this.
Blindspot made me wish I could forget what I just watched.
I'm gonna keep this show on the DVR for a few more episodes but my initial impression isn't favorable. 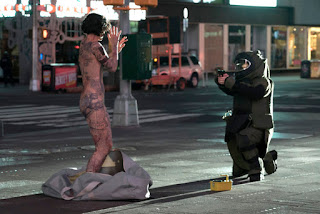 Posted by XxSITHappensxX at 1:06 PM