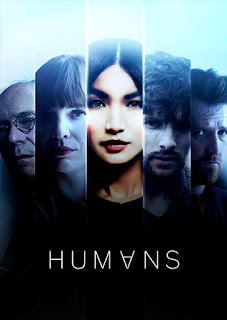 In the future Men are still helpless dolts that can't handle a house with three children, and women still feel threatened by their younger (newer) counterparts...there are still hopeless romantics that believe in true love and perverts that will have no qualms screwing a synthetic humanoid blonde doggy style.
So the first episode did a fantastic job of laying the groundwork, I really appreciated the subtlety this show demonstrated compared to ohh I dunno.......Fox's Almost Human.
I've been married 11 years and I have a son and have 2 jobs, I can cook, I know how to operate a vacuum and know how to sort  clothes to clean and know how to fold.... personally I think the clueless/ helpless man stereotype is hilarious!
I do know without a shadow of a doubt my wife would absolutely react the exact same way as Laura Hawkins.
Gemma Chan (Mia/Anita) did wonderful job as a synth....towards the end of the episode I honestly felt very uneasy after the revelation was made.
William Hurt was also very good as a widower who refuses to upgrade to a newer model Synth for personal reasons, I found it funny when the social worker comes by for a visit with the latest model saying he will be forced to upgrade his synth because they no longer "support such an outdated model.....reminds me of my I phone 3GS!
This isn't a new story, it's been told many times, The Second Renaissance in the Animatrix  was in my opinion the most similar to this show as far as I can tell from one episode.
I enjoyed Human's first episode and look forward seeing where the show goes from here? Will we see a Synth revolution or will the show explore the questions can a synth gain emotions via unique memories, can a synth prove it is self aware, and if it can be proven they are self aware would synths automatically gain "human rights", how would synths view religion, would a self aware synth invalidate the soul?
There is alot of fascinating/ terrifying theories that this show can explore, this show is in a way reminiscent to Gattica, they are both science fiction that is on the cusp of reality.