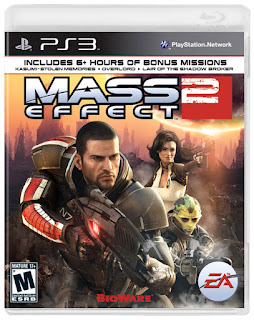 Released a year prior for the Xbox 360, ME2 finally reached the PS3 January 26,2011, I got my copy on February 12th and soon after my PS3 was taken hostage by my wife! So I was very late to the party....but thankfully I finally got there and what a fraggin party it was!
Being that I don't own an Xbox360 I had to rely on the interactive comic Mass Effect: Genesis to give me the background on the events that lead to ME2's prelude...basically a ME1 choose your own adventure minus the gameplay.
The character creation module allowed me to create Shepard in (as close) my own likeness which helped escalate the experience.
The controls took a little getting used to but by the time I recruited   Garrus I had a good working idea of the Power wheel and Weapon wheel, and when I watched the advanced combat training vids it all clicked. Once your familiar with assigning "macros" for your squadmates combat becomes alot more enjoyable!
The game's story is incredible and between recruiting members across this richly developed galaxy to side quests and loyalty missions you never feel like the story has come to a screeching halt to do something slightly off the beaten path. Everything you do in the game breathes life and depth to the galaxy you're in. For the shadow brokers out there who crave every iota of info a game has to offer Bioware does not disappoint, every planet in every system has detailed info, every race has detailed info, every individual, organisation, item, weapon and location has info to be read via codex.
ME2 has Shepard jumping across the galaxy kicking collector ass and recruiting some of the biggest bad asses the galaxy has ever known, like Garrus the wise ass Turian Sniper, Miranda Lawson a Cerberus operative with a genetically created ass that would have Sir Mix-a-lot writting home to momma, Jacob Taylor the token black Cerberus agent who is really good with guns (I'm just sellin' it like I bought it), Grunt the tank (breed) Krogan, Mordin Solis the Salarian version of Spock, Thane Krios imagine Aquaman as an intergalactic assassin, Jack the human biotic...Kat von D with force powers, Kasumi Goto a master theif that rocks thermoptic camo Jedi robes, and Intergalactic bounty hunter Zaeed Massani and all around grumpy pants. Ooops almost forgot Legion the Geth Infiltrator who joins Shepard Commander to stop the ancients.
It's been a long time since I've played an RPG with such distinctive and well developed (ahem Miranda's ass) characters where you truly care about each and every one of them. As shepard Commander it's your choice to care enough to help all of the members of the SR2 Normandy and be a Paragon of the people or a renegade dick who doesn't give a shit weather you live or die. I'm proud to say I saved my entire crew on my first run....my Insanity run will not yield the same results.
ME2 benefits from possibly the most well written script and impressive voice acting I've yet to experience in my years of playing video games. See if you recognize The Illusive Man and Joker's voice actors...
The game play for ME2 takes a little getting used to, the weapon and power wheels, issuing squad commands etc. but once you get familiar with the advanced combat techniques the battles are so enjoyable, although ME2 is a RPG the battle system takes heavy que's from notable TPS's like SOCOM... commanding your squad to move to certain locations, which enemy to target, what biotic or tech to use and comboing those powers!
I am one of those RPG players who must collect every upgrade, every weapon, every item, max out every character before facing the final boss of the game....I think I picked up that habit from FFVII (had to have KotR summon to shove up Safer Sepheroth's ass ) so when I finally opened the Omega 4 relay I was rolling with the most loyal, most hooked up team of galactic bad asses this side of LV 426!
Mass Effect 2 is a phenomenal game, Story, Characters, Game play, Graphics, Audio all come together to create a gaming experience you will remember years from now! It's so good it made me want to play the first Mass Effect...Still hoping they find a way to bring it to the PlayStation somehow.
10/10

Posted by XxSITHappensxX at 3:14 PM