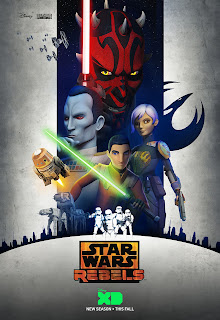 The mid season trailer for the third season of Rebels has just dropped!
Much like the season 2 mid season trailer the hype this trailer brings is crazy, I just hope we don't get a bunch of filler episodes till the season finale like S2.
I don't think we will because of ALL the core stories going on this season....Ezra and Kanaan....is Ezra going to the Dark Side? Kannan and Bendu, Ezra and Maul, Maul and his quest to find "him" (which apparently he does), Thrawn, when will observations conclude and we see him implement his master strategy!?
Sabine now has the Dark Sabre! When will we meet her mother and is it Bo Katan? Did Bo visit Ben while he was on Tatooine??? Inquiring minds want to know!
Will Orsen Krennic show up this season? next?
Seeing Rex and Saw reunite was great! Did I see Death Troopers?
I'm betting we see the different Rebel Cells unite in the finale against Thrawn as Maul reunites with an old "friend". And I'm betting Zeb isn't making it to S4 and Kallus is actually a double agent! I can't wait for SWR to return this Saturday and am soo fascinated how rebels will connect to Rogue One!

Posted by XxSITHappensxX at 2:42 PM