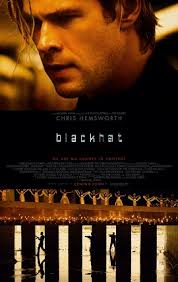 This movie has 2 glaring problems, first the movie doesn't know if it wants to be on team Swordfish or team 007. The second problem the star, Chris Hemsworth, doesn't know if he wants to be Thor or Neo.
All in all Blackhat was decently entertaining with it's cyber criminal mystery/drama, I just had a very difficult time believing Hemsworth was a wizard class hacker.
I also found the cinematography distracting certain scenes looked like they were filmed on a camcorder and other scenes with 35mm film.
Nothing against Hemsworth I've seen him in pleny of other roles (besides Thor) that he did fine with....SWatH, Cabin the in Woods, but this was not the right actor for the role. When I think about wizard class hackers my mind conjures up visions of Kevin Smith or DJ Qualls or even Chris's brother Liam rockin' some hipster glasses.
When I finally met the antagonist I was completely underwhelmed...I was expecting a much more memorable criminal...in all fairness that is probably a better representation of a cyber criminal than what we've been force fed by Hollywood.
Highly predictable, hardly memorable.
Save your $$$

Posted by XxSITHappensxX at 2:28 PM