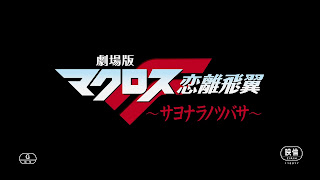 I enjoyed the Wings of Goodbye, but I think if a fan of Macross, that some how missed the series, saw the movie they might not enjoy it as much. In my opinion the differences between MF and MF:WOG are not as poignant as SDFM and DYRL. The characters are significantly better realized in MF:WOG than in the series, most notably Alto, Ranka and Sheryl, I remember
watching the series and feeling like they were developing the characters as they went. In the
movie the three seemed like they were finally truly realized. Alto feels more grounded and mature and less of an angst ridden teen trying to find his own way in the world versus following the family Kabuki tradition. Ranka seemed a lot less childish and Sheryl much less stand offish, which I think was their major short coming early in the series for both of the characters.
I think old school fans, fans of SDFM/DYRL will have issues with the surfing Macross Quarter, I was like WTF but went with it, and it really didn't detract much from my enjoyment of the movie. The animation quality was superb from start to finish, the songs were good but I liked the songs from the series much more. The Open Ranka concert song being the notable exception.
Like the series there are many homages to past Macross series and even a quick cameo by Isamu Dyson!
I'm glad they finally resolved the triangle but it still felt like a bit of a cop out having Alto pull a Shin at the end. Of all the resolutions throughout Macross' history SDFM still has the best ending in my opinion followed by Macross Plus.
Macross Frontier: Wings of Goodbye is an awesome anime movie and a very good Macross movie that I think is better enjoyed if you've seen the series first.

Posted by XxSITHappensxX at 2:51 PM