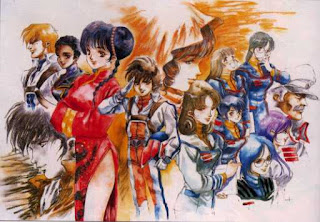 With the success of 2007's live action Transformers movie it was inevitable that Hollywood would push their luck and attempt to tap another resource....the great eye of Hollywood has turned it's attention to 80's animated shows. GI Joe is on the way to a theater near you and the defender of the galaxy; Voltron is rumored to be on the way along with He-man, and the Smurfs!

Regrettibly so is Robotech, one of my earliest introductions to the wonderful world of anime. I first got word of this back in Sept. 2007 http://www.superheroflix.com/news/NE5Fq875B8XR88 and I figured it would remain on the back burner until the idea fizzled away, unfortunately new information has recently surfaced about Warner Bro's hiring Alfred Gough and Miles Millar to pen a script, the project originally had Lawrence Kasdan writting the script. I'm almost positive Kasdan has never heard of Robotech, but I feel he'd produce something better than the two guys responsible for the Mummy: Tomb of the Dragon Emperor and Smallville...
http://www.hollywoodreporter.com/hr/content_display/news/e3i7c31f644b1ae0cdc04ce33782f0178e6

I have no hope that this movie will do the source material (Super Dimenstional Fortress Macross) any justice at all, the fact that Warner Bro's is making a silver screen adaptation of an adaptation of three completely separate anime by a company that shouldn't hold any rights to the Macross franchise speaks volumes to this project. Tobey Maguire as Rick Hunter (Hikaru Ichijo for the uninformed) DECULTCHA!!!
If I hear Lynn Minmay sing "we will win", I will get up and demand a refund!
If your interested in this movie and don't know the difference between Macross and Robotech please go to http://macrossworld.com/mwf/index.php?showtopic=228 and learn! It will open your eyes to the difference between the Original work and a second rate mashup of three separate works with some glaring discrepancies in the story, characters and plot.
Posted by XxSITHappensxX at 5:51 AM