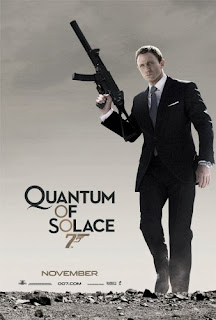 Let me begin this review by saying, this isn't your daddies Bond. Quantum of Solace begins practically where Casino Royale left off, Bond is tearing through the Italian country side as he makes his way from Mr. White's villa on lake Como. Bond is pursued by a pair of high end Alpha Romeo's, the car chase was very Bondesque, and the pace never lets up throughout QoS!

With Mr. White in the hot seat Bond and M interrogate him, don't worry though Mr. White keeps his pants on! They soon realize they have no intel about the organization Quantum nor who is involved, but they learn relatively quickly not to trust anyone, and this paranoia follows Bond throughout the movie. Giancarlo Giannini, returns as Mathis and emphasizes the point of trust, I truly enjoyed his character and was upset that his dry wit won't be around in the next Bond movie, Mathis describes the situation Bond finds himself in best, "As we get older the good guys and the bad begin to get mixed up" the final scene Mathis was in was fantastic, QoS needed more scenes like this to break up the frenetic pace.


Approximately half way through QoS we are introduced to agent (Poppy) Fields, (Gemma Arterton) who is tasked with bringing Bond back to London, it's unfortunate her character ends up as a disposable pleasure instead of a meaningful pursuit as Vespa would say. The scene where Bond discovers Agent Fields on the bed face down was unmistakable fan service.


The other female in Quantum of Solace, Olga Kurylenko as Camille does a terrific job as the other Bond girl, in fact I found the two women portrayed very unique Bond girls, Camille the strong independent woman of the nineties and Poppy the glamorous yet weaker willed woman who always gets swept away by Bond in the seventies. Judy Dench did an amazing job as M...again she has done a spectacular since she took the role back in 95 in Golden Eye.


QoS does have an obvious resemblance to the Bourne series in the action scenes, but for those who call it James Bourne you can have your Dalton, Lazenby and Moore Bonds, I prefer my fromage with crackers. Like I said earlier, this isn't your fathers James Bond, and personally Craigs Bond is not only refreshing but the characters development is something that all previous incarnations were sorely lacking.


The plot of QoS is your typical secret agent setup, a secret organization is attempting to control a natural resource on earth. Could Quantum be a previsioned SPECTER, I do hope so then we could revisit this Illuminatti-like organization again and find that Dominick Greene was NOT the head of the organization! I really was not impressed with QoS' villain, Dominic Greene (Matthieu Amalric), Le Chiffre may not have been the true villian in Casino Royale but he was leagues more sinister than Dominick Greene and his gay henchman. I did think it was timely though how the global climate crisis was hinted at in QoS as it's been pretty much debunked that the whole global warming/inconvenient truth was a carefully constructed hysteria.


Also for the first time the title of the movie actually means something, Bond is looking for the smallest piece of solace after Vesper betrayed his love. The Bond in QoS is acting like most men would after the events in CR, throw in Bonds ego and it's very believable how Bond acts in QoS. One last thing, Chris Cornels' intro "You know my name" for Cr was one of the best ever, the QoS theme song with Jack White and Allicia Keys....one of the worst.
I enjoyed this movie very much, as a stand alone film it's not as strong as Casino Royale but the two films together are brilliant!

Posted by XxSITHappensxX at 7:49 PM

Email ThisBlogThis!Share to TwitterShare to FacebookShare to Pinterest
Labels: Movies, Quantum of Solice