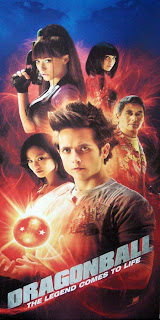 Growing up in the eighties I was introduced to anime thru shows such as Voltron (power rangers for you kids today), Battle of the Planets, and the Super Dimensional Fortress: Macross (Robotech for the uninformed). Aside from anime I also grew up on video games such as Final Fantasy and Street Fighter both of which have had the Hollywood treatment, neither of which were very well recieved. I really don't understand why anime is being made for the silver screen, anime such as Ghost in the Shell, Wings of Honeamise, Akira, Ninja Scroll, Voices from a Distant Star, they don't need to be made...or should I say remade for the silver screen. Anime is a niche market here in America, I enjoy Macross and I cringe at the thought of Tobey Maguire and Warner Bro's owning the rights to Robotech (Macross for the uninformed).
As far as Dragonball is concerned I've never been able to sit thru one episode of this anime, it's not one I'm remotely interested in, but I'll tell ya one thing this has crapfest all over it! I think this is gonna suck as bad as Dragon Wars...and that SUCKED balls.

Posted by XxSITHappensxX at 12:14 PM