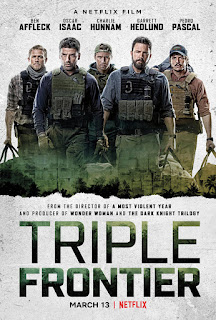 The trailer for triple Frontier caught my interest, 5 ex special forces reunite to get paid by killing a South American Drug Lord, an off the record mission that should go by the numbers with minimal casualties and maximum payola.
I enjoyed TF, it was like the A-Team but grounded in reality. There were some scenes with tension but for the most part nothing that caught me by surprise. I liked the cast they felt more believable as ex Spec Ops team than some of the previous names attached to the project.
If you have 2 hours to kill it's not a bad movie, I heard one review complaining that the characters all seemed the same....I think that's a bit over simplifying the characters. Yes they're all ex Spec Ops, Yes they're all strapped for cash to some degree, but each have they're unique ability, Catfish (Pablo Pascal) is the Pilot, Redfly (Affleck) is the planner, Ben (Garret Hedlund) is the scout, Pope (Oscar Isaac) works as a PMC and the mission leader, Ironhead (Charlie Hunnam) is the level headed team member that keeps the team grounded  and focused on the missions objectives.
Like I said the movie aight, I think it's the cast that made the movie better than it is.

Posted by XxSITHappensxX at 1:12 PM