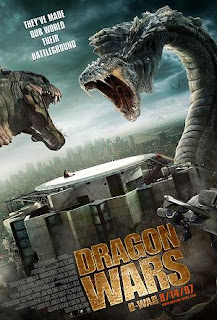 My sincerest apologies to anyone who paid money to see this in the theaters, or bought this steaming pile of excrement on DVD! Fortunately I borrowed a copy from a co worker and still felt violated after sitting thru *most* of it....I couldn't do it man, it's that bad!
I remember sitting home on Sunday afternoon's as a kid watching channel 11's Godzilla flick, I loved Godzilla and his crazy monster pals like Jet Jaguar and King Ghidora even the newer Heisei and Milenium series are fun to watch as an adult.
This movie tanks on every level; acting is atrocious, the actors must've been desperate for a paycheck, the audio sync is off throughout the movie, the CG serpents stand out like a sore thumb, there is no sensible transition between scenes...perfect example big battle in down town LA, segways to a scene where the lead female is tied down on a sacrafical altar in front of the tower of Orthank from LotR: TTT! O.o WTF!? The evil villan looks like he belongs in a Mortal Kombat movie. Lets go back to the battle in LA for a moment, an army of CGI clones obviously inspired by 300 and the LotR trilogies just show up in LA riding veloceraptors and lumbering lizards with rocket launchers strapped to their back and what looked suspiciously similar to Nazgul wyrms.
The military comes to the rescue when the proverbial shit hits the proverbial fan with tanks chopers and fully auto assault rifles....but they loose! O.o
There was absolutely nothing special about the special effects in this action packed part of D-Wars
Apache Helicopters flying top speed thru a metropolitan area doing 90 degree turns to evade the Nazg....baby dragons. Gawd Awful!!!
This movie makes Snakes on a Plane look like Shakespeare.
F-
Posted by XxSITHappensxX at 1:17 AM